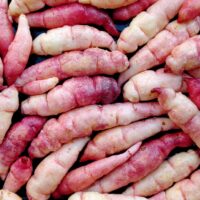 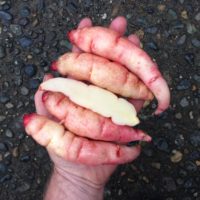 Chockalilum is a Cultivariable original variety, introduced in 2018.  This variety was selected from crosses between Orange and Ken Aslet, with the goal of producing a mashua that is both red and early.  This is a step toward that goal, but not as red or as early as I would like.  In 2019, Chockalilum was free of all viruses that we test for in mashua.

Chockalilum tubers are pink, ranging from white with just a little pink when immature, to fully pink or even darker red at full maturity.  They have a relatively low density of eyes, which means less cleaning.  The flavor is fairly cabbagey and will probably remind you of Brussels sprouts.  It lacks any bitter or flowery aftertaste.  The texture is soft and the tubers will break down with long cooking time.

Plants are medium in size, reaching about 8 feet on trellis.  The yield is intermediate.  You should have no trouble getting 3-4 pounds per plant in a suitably mild climate with plenty of water.  As with most mashua varieties, color develops late, so you will get the best appearance with a late November harvest, but this variety yields well from mid-October.  Intermediate dormancy, with sprouting typically beginning in March.  Color will continue to develop with exposure to light and the tubers become dark red after a few weeks.  Chockalilum makes a very thickly tangled root ball and is pretty difficult to harvest because of that.  I typically use a knife to cut apart the ball, which helps to free up the closely packed tubers.  I have seen relatively little bacterial staining on this variety.  Flowering is late and seed production is poor, but you can get a few seeds if you hand pollinate.