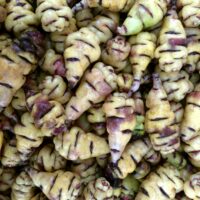 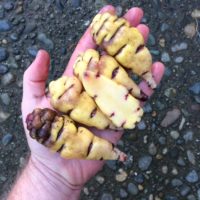 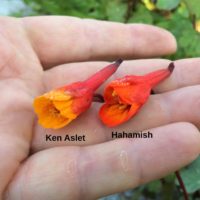 Hahamish is a Cultivariable original variety, introduced in 2017.  It is best suited for use as an ornamental, although it is edible like all mashua varieties.

Hahamish has a strong cabbagey flavor and a some bitter aftertaste.  Think of a tuber that tastes like a Brussels sprout.  The cooked flesh remains moderately firm.  The yellow color is retained in cooking.

Hahamish is an early flowering variety, beginning here in early August.  This is a full month later than Ken Aslet, but much earlier than all other heirloom varieties.  Unlike Ken Aslet, which has yellow petals, this variety has orange petals.  The plants are relatively small for mashua, reaching about 7 feet on a trellis.  Yields are small, reaching around two pounds.  The tubers are also fairly small, typically in the two to four inch range.  Hahamish forms tubers very close to the surface of the soil and they are often exposed.  It will benefit from a few inches of hilling up around the time that it starts flowers.  Hahamish tubers turn green when exposed, but this is harmless in mashua and the tubers are safe to eat.  Root balls are typically compact and easy to pull up without digging.  I see a moderate amount of bacterial staining on this variety.  Despite its early flowering, Hahamish typically sets very few seeds.  By delaying planting to July, you can force Hahamish into later flowering, which increases the chance of seed production if you have other varieties that flower in the fall.