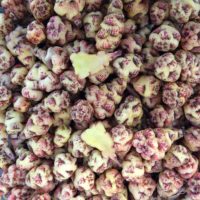 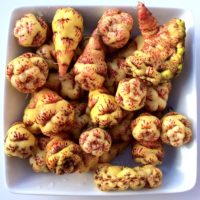 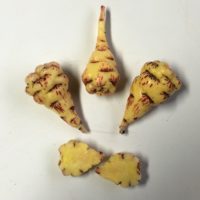 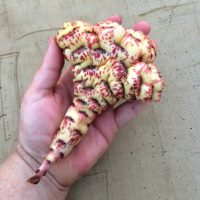 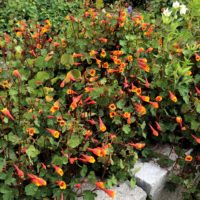 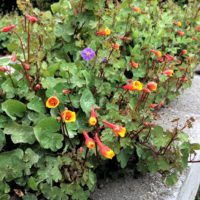 Ken Aslet is probably the best known of all mashua varieties outside the Andes, although as an ornamental, rather than an edible.  It was reportedly discovered by its namesake at the Royal Horticultural Society garden at Wisley, UK as a volunteer seedling in the 1950s.  It has been available in the US since at least 1978.  This variety is more popular as an ornamental than as an edible, since most other varieties are much higher yielding and better flavored.

The Ken Aslet strain circulating in the USA tests positive for several viruses, including Potato Virus S and Potato Virus Y, neither of which has been previously recognized to infect mashua.  I am cleaning up this variety and it won’t be available again until that is done.  I don’t recommend growing this variety from any available source, including us.  I’m sorry for the inconvenience.  Because these viruses were not known to infect mashua, I never tested for them before 2018.

Ken Aslet is a pungent variety, with a raw flavor like horseradish pickled in cheap perfume.  As usual, the cooked flavor is much more pleasant.  Ken Aslet has a soft texture and a strong cabbagey flavor with a bit of bitter aftertaste.  The flesh is light yellow and the color is retained when cooked.

Ken Aslet is often claimed to be a day neutral variety, but I would describe it more as an intermediate daylength variety.  It does flower and form tubers earlier than most other mashua varieties, but that means late summer rather than early fall.  If planted very early, in February or March, it will sometimes flower in spring, although it usually stops and then resumes in summer.  It appears to initiate flowering at day lengths below 14 hours.  Tuber size ranges from less than an inch to about nine inches, but most are in the two to four inch range.  Yields are low, usually between one and two pounds.

Although the specifics of its origin are lost to history, based on its appearance, I imagine one parent was a Peruvian variety of the type that is called “tears of blood”.  I also think it is likely that it resulted from a cross between two varieties, rather than a self-pollination, because the diversity of its progeny is much higher than most heirloom mashuas.

Ken Aslet has been widely available in the nursery trade since the 1970s. It has not produced a positive result for viruses that we routinely test for, but I still consider it somewhat suspicious. We don't test for everything and it has always looked a bit off to me. I hope to get more comprehensive testing done in the future.