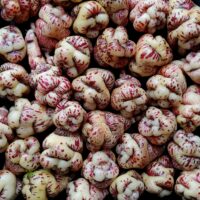 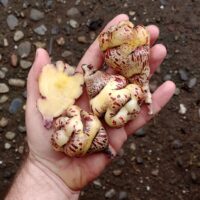 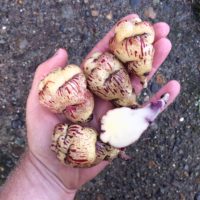 Okeho turned up as a volunteer among our Ken Aslet plants, so it is most likely a self-pollinated seedling.  Sometimes, I know exactly why I keep a variety; there are objective, quantifiable reasons.  In other cases, I just like a variety and the reasons are not immediately apparent.  Okeho is one of the latter.  It isn’t very high yielding, nor large, nor the best tasting, nor among the most disease resistant or the most tolerant of harsh conditions.  But, I like it.  Maybe I will discover at some point that I have intuited some value that is not obvious.  Maybe my reasons are irrational.

Okeho would be a good variety if you want to test your limits with mashua flavor.  It is strongly cabbagey, like Brussels sprouts, but also has a strong flowery flavor, and is moderately sweet.  Many people find this to be a difficult combination, but I can attest that you can learn to enjoy it with experience.  I find that I tend to go for the stronger flavored mashuas these days when we serve more than one variety.  The cooked texture is soft.  The skin and flesh color darken with cooking, with the skin becoming mostly blue and the flesh blue with a yellow core.

Okeho is a somewhat early flowering variety, beginning here in mid September, which is about six weeks earlier than most varieties.  The plants are relatively small for mashua, reaching about 6 feet on a trellis.  Yields are small, reaching around two pounds.  The tubers are also fairly small, typically in the two to four inch range.  Dormancy is long, with tubers sprouting in April or even May.  Root balls are typically compact and easy to pull up without digging.  I see a moderate amount of bacterial staining and cracking on this variety, although this is not likely to be a serious problem in well drained soil.  Okeho flowers modestly but sets a lot of seed and, because it is early, you only need to keep it going until early November to have a chance of harvesting some mature seed.