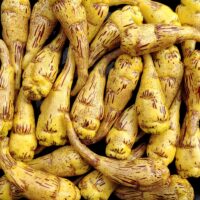 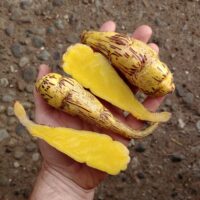 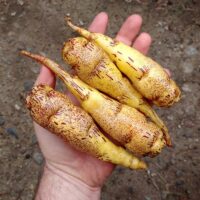 Puca-añu is a Peruvian heirloom variety originally brought to the USA by Oregon Exotics.  We have Oregon Exotics to thank for importing many varieties of Andean tubers in the years before laws in both the US and South America made it virtually impossible to import new varieties.  “Puca” means “colored” and “añu” is another name for mashua, so this is literally “colored mashua,” likely referring to the stripes.  I don’t offer a lot of heirloom mashuas anymore because they tend to be infected with viruses that are hard to remove, but this one is now disease free within the limits of my testing.

This is a really attractive variety.  Tubers are cream to yellow with purple markings.  They become more yellow as they mature.  The markings make every tuber different and interesting to look at.  They tend to be long and narrow, up to a foot long, but a lot of the tuber is a narrow tail, so the most desirable part is typically in the three to four inch range.  When cooked, the color darkens to a mottled blue and yellow.  This has what I would describe as the classic mashua flavor that many people struggle with.  It has a strong combination of cabbage and flowery flavor, but is also quite sweet.  If you like strong mashua, you might love this one.  If you prefer your mashua mildly turnippy, look elsewhere.  The cooked texture is very soft and you can probably reduce the cooking time a little if you want it to hold together.

This is a medium size variety, reaching about seven feet on trellis.  Moderate yield and fairly high tuber count.  The root balls are right on the edge of what I can pull without tools.  One foot in-row spacing should suffice for this variety.  The tubers have long dormancy, typically sprouting in April.  The flowers are the purest red of any mashua variety in the collection, as opposed to the more common orange or orange and yellow varieties.  It is a fall flowerer, but if your growing season is long enough, you can collect a little seed from it.