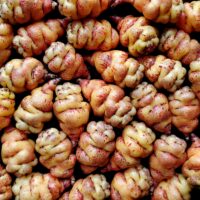 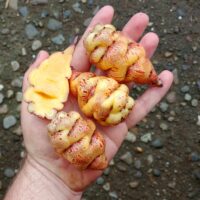 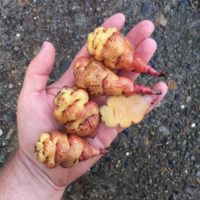 Suqualus is a Cultivariable original variety, introduced in 2018.  It is progeny out of Ken Aslet and I anticipate that it will be more popular as an ornamental than an edible, much like its parent. I think the tubers are prettier than those of Ken Aslet, but otherwise the two varieties are quite similar.

Suqualus is a very cabbagey variety that immediately made me think of Brussels sprouts.  The flesh is soft when cooked and the dark yellow color is retained.

A summer flowering variety, similar to its parent, Ken Aslet, although it produces a smaller number of flowers.  Orange flowers with yellow petals.   Tubers are fairly small and yields are low, typically between one and two pounds.  Plants have a compact root ball that is usually easily pulled without digging.  I see relatively little bacterial staining on this variety.  The tubers have long dormancy, typically sprouting in April.  Although it flowers early, Suqualus typically sets few seeds. It may be possible to increase its seed set by delaying planting to July so that it flowers in the fall.