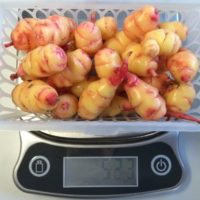 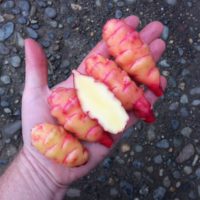 OE Blush is a variety that was introduced from South America in the late 1990s by Oregon Exotics nursery.  We have Oregon Exotics to thank for importing many varieties of Andean tubers in the years before laws in both the US and South America made it virtually impossible to import new varieties.

I haven’t offered this variety for a few years and the pictures need to be updated.

OE Blush is slightly sweet and barely tart, closer to potato flavor than anything else that I can think of.  The cooked texture is moderately firm.  The tubers tend to be light yellow with orange blotching at harvest, becoming completely orange with exposure.  The skin color is mostly lost in cooking, but the flesh remains yellow.

OE Blush plants are large with thick stems and resist sprawling longer than most varieties.  Stolons can grow as long as 16 inches, but most are shorter.  The largest tubers are usually on the longest stolons.  Tuberization photoperiod is about 12 hours, the same as most heirloom varieties.  Average yield is 1.4 pounds.  This is not an early variety, but the tubers can grow to be pretty big by full maturity in late December.  The maximum tuber length is 6 inches and the average tuber length is 2.4 inches.  Average tuber count is 22.  There are roughly equal numbers of large and small tubers with this variety.

OE Blush is a moderate flowerer with a mid-styled flower, flowering here June through August.