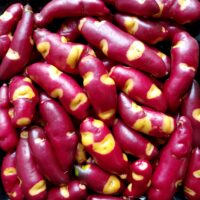 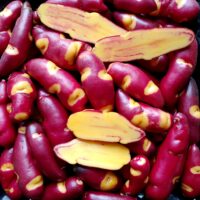 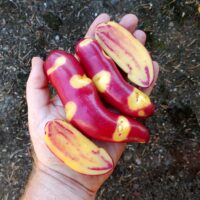 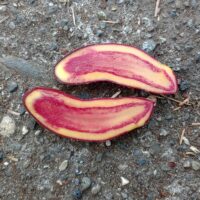 Bloody Banana is a Cultivariable original variety, selected in 2019. It is a long diploid with red skin and yellow eyes. The flesh is dark yellow with red streaking. It was selected out of a group cross between low dormancy Colombian and high dormancy Peruvian and Bolivian diploid potatoes. Germplasm supplied by the USDA Potato Introduction Station was used in breeding this variety.  The name Bloody Banana was chosen from popular suggestions in the Cultivariable Facebook group.

Bloody Banana is a mostly yellow flesh potato that has a flavor similar to the classic papa amarilla. It has rich flavor and dense, moist flesh that tolerates most methods of preparation, but I think it is best cooked dry, particularly roasted. Tubers top out at about seven inches and retain the fingerling shape even at full maturity. The skin is thin and does not need to be peeled. When cooked, the yellow flesh becomes more vivid, while the red streaking diminishes, but doesn’t disappear completely. This often results in a blending of the flesh colors into a deep orange color.

Blood Banana appears to be a fully long day variety, with good yields and short stolons even with a summer harvest. Maturity appears to be at about four months, but I haven’t been growing this variety for very long, so that may be plus or minus a few weeks, particularly in different climates. The size is not very uniform, so you can expect about half over three inches and half under. My yields have been about two pounds per plant. Dormancy is about six weeks, which will not be enough for any place with a real winter, although this can be extended by keeping the tubers in the refrigerator. Bloody Banana has moderate field resistance to late blight. It remained in good condition long after more vulnerable varieties planted nearby had succumbed. This variety seems to have some scab resistance, as I have not seen any on the tubers so far. Given sufficient space, plants reach about three feet tall with a similar spread. They flower moderately and set seed reliably with a diploid pollinator. Tubers are often formed vertically and tend to pop out of the soil, so it would be a good idea to hill this one up a few inches by the time flowering begins.

True seed was collected in 2020 and was open pollinated, which includes intermittent hand pollination. I tried to pollinate from other fingerling diploids to maintain the shape, but the insects will not have been so selective, so I imagine we will see about half fingerling types and half other shapes. I suspect that colors will be diverse, although there should be a lot of yellow flesh. I pollinated primarily with high dormancy diploids, so I hope that some of the progeny will maintain the flavor and color while adding improved dormancy. Fast and uniform germination. It was one of the earliest in 2021.