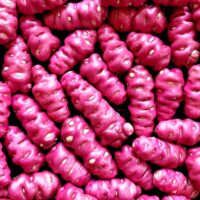 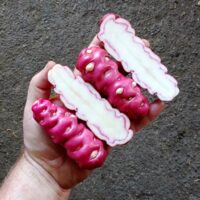 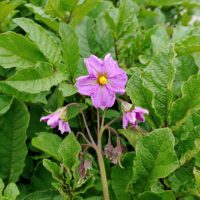 Chiquilla Pitiquiña is a Peruvian heirloom potato. It is a diploid with strong dormancy.  While it does form tubers under long days, it does so fairly slowly and yields tend to be low.  It is a better producer in the fall and will do best where it can be grown into November.  Other than the difference in color, this variety and Cuchipa Ismaynin are quite similar, although they were found not to be closely related in a study of their genetic markers.

Chiquilla Pitiquiña was provided by the USDA Potato Introduction Station as PI 664475.

Chiquilla Pitiquiña has a fairly waxy texture and moderately thick skin.  The flesh is white with a red ring and becomes light pink when cooked.  It will hold up under most cooking methods, although it is probably less ideal for frying or mashing due to the smaller tuber size and deep eyes.

Chiquilla Pitiquiña produces modest yields, around a pound per plant from a late August harvest, with most tubers smaller than three inches.  When grown into the fall, both yield and tuber size are increased, with yields around two pounds per plant and some tubers exceeding five inches.  It is not unusual for some of the tubers of this variety to be sprouting at harvest, which is kind of weird given that the tubers have dormancy, but it has done this reliably over several seasons.  This variety has deep eyes and will grow best in a loose, more sandy soil.  In clay soils, the tubers may prove challenging to clean.  The trick with deep eyed tubers is to wash them as soon as they are harvested, before the soil dries to the tubers.  Plants flower abundantly and set seed easily with a diploid pollinator.  This variety has moderate late blight resistance.  It survives bight very well here, but does form lesions that sporulate.

TPS was collected in 2020 and was insect pollinated. It grew in a block with other high dormancy diploids and would guess that the majority of the progeny will be reds and blues with unusual shapes.  This line was among the fastest to germinate in 2020.