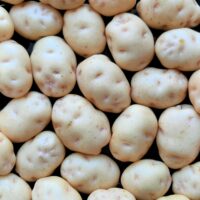 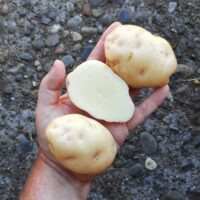 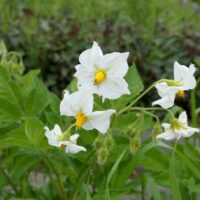 Fina de Carballo (literally “fine of Carballo”) is an heirloom potato long grown in Galicia, Spain.  Its origin is unknown, but its characteristics indicate that it must be either of Chilean or modern origin.  This potato is known in the region for its excellent flavor.  Tubers average about three inches in diameter.  Skin is white to slight pink with slightly pink eyes.  Eyes are moderately deep.

Fina de Carballo has an all purpose texture, but leans more toward the waxy side.  I thought the flavor was very good, well rounded without either bitter or sweet elements.  The skin is relatively thin.  That said, I don’t consider it to be one of the best potatoes that I have tasted.  It is probably in the top ten percent.  It is hard for me to judge, since I have tasted a lot more potatoes than most people.  Compared to commonly available commercial varieties, I can understand why this one would stand out.  It also looks more rustic than modern, round potatoes and, as I often point out, the more you like the appearance or story of a variety, the better that you are likely to find the flavor.  It may also be better when grown and prepared in the traditional Galician ways.

Fina de Carballo plants are compact.  Maturity is early, perhaps just reaching mid-season in mild weather.  Yields are low, just about a pound per plant here.  Tubers have strong dormancy and will store well for at least four months.

This variety appears to be vulnerable to all the common potato diseases.  I saw no indication of blight resistance, scab resistance, or potato virus Y resistance.

Fina de Carballo flowers in a determinate fashion.  At the most, you will get one small cluster of flowers per stem.  Like most early varieties, it really doesn’t want to hold berries.  It is male sterile, so requires a fertile variety to pollinate.  I was able to get some berries with heavy applications of bulk pollen applied at least twice per day.  Because the plants entered senescence almost as soon as the berries began forming, they did not mature before the death of the foliage, but some of them did grow large enough to provide viable seed.

I doubt that I will be able to offer TPS from this variety, although sometimes I try a variety again and have better luck.