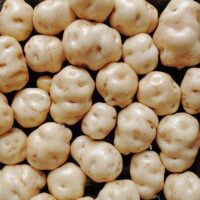 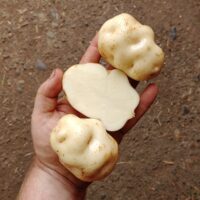 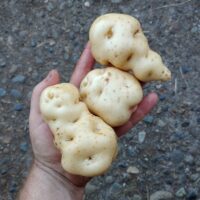 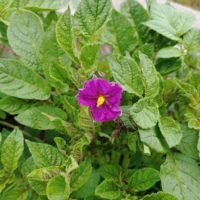 Jancko Phiñu is a Bolivian heirloom variety.  The name translates more or less to “fine white.”  It is a high dormancy (stenotomum type) diploid.  Tubers are small, typically reaching two to three inches, with white skin and flesh.  This variety was provided by the USDA Potato Introduction Station as PI 642442.  While the tubers are not particularly exciting to look at, this variety carries a range of useful disease resistances, including both late blight and bacterial wilt, so it is potentially valuable for breeding with other diploid potatoes.

Jancko Phiñu is a starchy potato, with light, dry, white flesh. It has a fairly neutral flavor, with no detectable bitterness. This is a good potato for roasting or baking. It has thin skin and fairly shallow eyes, so it is easy to prepare.

Jancko Phiñu is a large, late variety with sprawling plants.  Tubers are large enough to harvest at four months, but five is better.  The tuber count is fairly low, ten to fifteen, but they can be quite large for a diploid and my yields average just shy of two pounds per plant.  Stolons are very short and tuber crowding can lead to distorted shapes.  Jancko Phiñu sets berries readily with a pollinator.  It was the champion TPS producer in 2020, yielding more than 10 grams of seed per plant (vs. an average across all varieties of 1.6 g per plant).  If you want to breed diploid varieties that have high seed production, this would probably be a good choice.  This variety has long dormancy, 5-6 months under good storage conditions.

True seed of this variety was open pollinated.  It grew in a block with other high dormancy diploids, so I expect a wide range of shapes and colors, mostly with good tuber dormancy.  There should be a lot of red progeny because this plant carries the genes for red pigment and will have been crossed with many varieties that carry the necessary distribution genes for tuber color.  Very fast and vigorous germination.