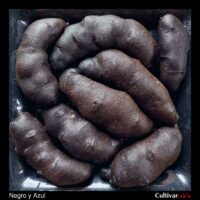 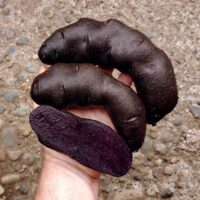 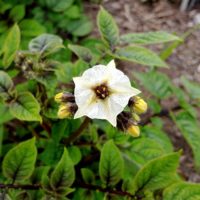 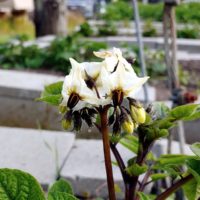 Negro y Azul is a heavy producer of medium to large, slightly irregular tubers with very dark blue, almost black, skin and flesh. It is has dense, moist flesh, a mildly bitter flavor, and very high anthocyanin content. Negro y Azul is a late season potato, with large, sprawling plants that yield best in the fall. This is a tetraploid variety with excellent dormancy.  Tom Wagner selected this variety in the early 1990s from a cross between his Red Regis, a potato derived from the Solanum chacoense hybrid CT8406-33, and Lenape, a chipping potato with good flavor, but somewhat notorious for high glycoalkaloids.  Negro y Azul is, in turn, a parent of several of Tom’s better known varieties, including Azul Toro, Black Irish, and Red Ox.  Stolons can be rather long on this variety, reaching out a foot or more.  I suspect that the glycoalkaloid level in this variety comes close to the safety limit or may even exceed it, so it would be best not to consume huge amounts in one sitting.  Peeling reduces glycoalkaloid content and this variety makes great blue mashed potatoes, so that is a good approach if you find the tubers too bitter with the skins on.

Unlike tomatoes, which grow true from seed, potato varieties must be grown every year to survive and they also need to be periodically cultured in a laboratory to free them of viruses.  Because of this, the majority of Tom’s potato varieties have been lost.  In many cases, even his most popular varieties are now grown by only a few people, since they have accumulated viruses and become unproductive over the years.  I had given up on finding Negro y Azul, which was particularly disappointing, because I grew it for several years previously and lost it.  Happily, with some help from the Kenosha Potato Project, the trail of breadcrumbs finally led to a farmer still growing a few plants in North Dakota in 2019.  The variety was infected with Potato Viruses S and Y, but was still growing and yielding reasonably well, a testament to its superior disease resistance.  I am cleaning the variety up in the lab as of April 2020 and I hope to make it available again in 2021.

True seed of Negro y Azul gives a mix of blue with blue flesh, blue with white flesh, red with red flesh, red with white flesh, and white with white flesh, so just about every possible combination!  The female parent of Negro y Azul was a red skin/red flesh potato derived from a blue skin/blue flesh potato and the male parent was a white potato, so all of these genetics are still in there, ready to rise to dominance. The progeny tend toward large, late plants with longer stolons, but there is considerable variation.  Pretty slow and irregular germination from this one.