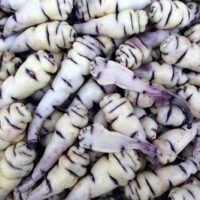 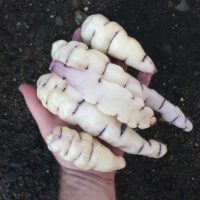 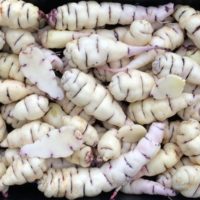 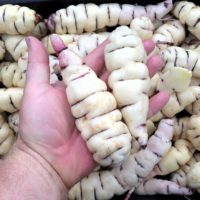 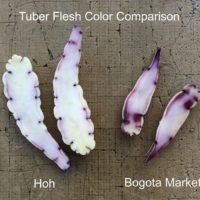 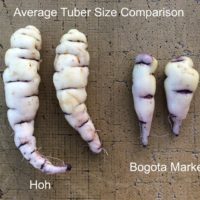 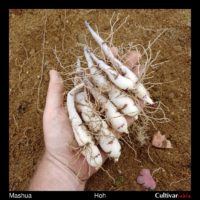 Hoh is a Cultivariable original variety, introduced in 2016.  This is our best producer, with earlier tuber production than most other varieties and the largest average tuber size.  This is the only variety that I would recommend trying for a commercial crop.

Hoh is a mild variety, slightly sweet with just a hint of cabbagey aftertaste.  The cooked texture is soft.  The color remains white when cooked.

Hoh plants are large, climbing up to 10 feet on trellis.  The tubers sprout and emerge early in the spring.  Hoh begins forming tubers almost a month earlier than most heirloom varieties and can produce a small but usable yield as early as August.  It still needs a full growing season in order to produce a normal yield of full size tubers.  Average tuber size is in the five to six in range, but this variety produces tubers as much as 16 inches long.  The tubers are also quite bulky.  This variety has short dormancy, often sprouting in February.  Hoh resists cracking in wet soil and bacterial staining better than most of the large-tubered varieties.  This is a fall flowering variety.

Hoh was grown from seed and has never tested positive for any tested pathogens.