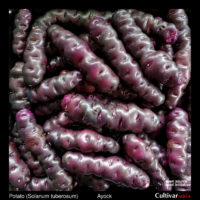 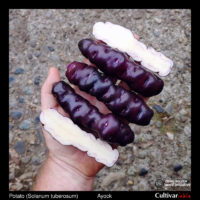 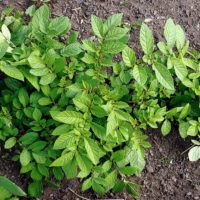 Ayock is a spectacular looking blue fingerling with a lot going for it, including attractive appearance, good resistance to early blight, nice short stolons, and very long dormancy. This is a Cultivariable original variety, introduced in 2017.  I offered it briefly, but decided that the yields weren’t high enough.  You disagreed and there was so much demand for this variety that I decided to bring it back.  This is a high dormancy (stenotomum type) diploid potato.  The name Ayock was chosen as part of a theme of place names in Western Washingon.

Ayock has an all purpose texture with a strong, but not bitter, flavor.  It is the right size for roasting whole or halved and I think it is delicious prepared that way.  (I cut these in half lengthwise and then roast for 30 minutes at 350 F on a pan lightly oiled with sesame oil.)  The flesh is white with a little bit of blue and the contrast between skin and flesh, along with the long fingerling shape, can be an attractive combination if you cut it creatively.  Tubers length maxes out at about seven inches, but most are about half that length.  The skin is thin and does not need to be peeled.

Ayock is a fully day neutral tuberizer, setting a mature crop in about four months.  Plants are large and sprawling at maturity.  The stolons are short, with most of the tubers clustered directly under the plant.  At full maturity, on a generous 15 inch spacing, it is possible to get yields of nearly two pounds per plant, but I suspect that most people will get about half of that.  It is important to maintain consistent soil moisture with this variety in order to prevent sugar ends from developing.  Otherwise, it seems to be a very healthy plant that suffers little from most common potato ailments.  Flowering is moderate, but the berry set is very good with a diploid pollinator.  Tuber dormancy is long and should be sufficient for any climate in the continental USA.

Ayock TPS has so far produced mostly fingerling shapes, with moderately deep eyes, in a fairly even mix of reds, blues, whites, and yellows. There is a lot of deep blue/black color, which is hard to find. Flavor has been uniformly good, with no bitter tubers. Texture is more to the waxy side of the spectrum. The majority of the plants produced tubers under long summer days, but a few plants produced no tubers and are probably short day. A picture of some of the progeny is included in the gallery above.