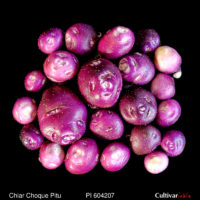 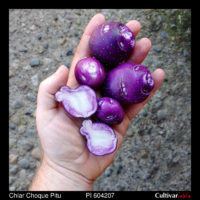 Chiar Choque Pitu is a variety of Solanum curtilobum, a frost resistant pentaploid potato species grown at the upper limits of cultivation in Bolivia and Peru. In our trial of the available accesions of this species, this variety came in second place for yield after Blue Bolivian and had equivalent frost resistance.  Chiar Choque Pitu was provided by the USDA Potato Introduction Station as PI 604207.  I don’t offer tubers of this variety, but I do collect TPS from it.  The Aymara name (which is also sometimes transliterated as chchiar chchoqhe pitu) translates to something like “dark flour potato,” which refers to its traditional use, freeze dried and ground into flour.

Chiar Choque Pitu is an all purpose potato, with medium density flesh and thick, chewy skin. It has the mild bitterness that most people describe as a strong “potatoey” flavor. In the Andes, this species is most often used in a preserved, freeze-dried form, but this variety is good for fresh eating.

Chiar Choque Pitu plants are large and vigorous.  The tubers are formed in the short days of fall, so this variety is best harvested no earlier than November.  At that point, yields are typically in the range of two to three pounds.  Plants survive light frosts and overnight temperatures into the upper 20s.  Tubers have very long dormancy,  The plants flower heavily and set plenty of berries but the seed count in those berries is generally low.