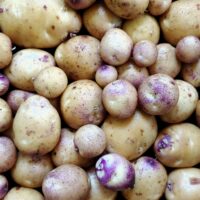 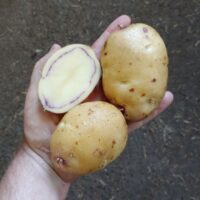 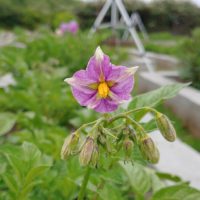 Cruza 148 is a rather famous potato in tropical areas, particularly in Africa, but rarely grown in the USA.  It was the first potato to demonstrate tolerance to bacterial wilt (Ralstonia solanacearum), a particularly destructive disease in warm, wet soils.  It is able to survive sustained infection and still produce a good yield.  It was, for a long time, the potato of last resort in areas where bacterial wilt was widely established.  It is also resistant to older strains of late blight.  Tubers are a blue and yellow bicolor with yellow flesh and a blue ring.  The tubers tend to grow in chains, which makes this variety a bit messy to harvest.  This has historically been more popular as a reliable potato for subsistence farming than as a market crop.

As is so often the case with varieties that have great disease resistance, the flavor of Cruza 148 is nothing special.  It has an all purpose texture and a fairly bland flavor.  The blue color, while beautiful in small tubers, mostly disappears by the time they mature.  Don’t get me wrong, it is a potato that I am happy enough to eat, it just isn’t very special.

Yields with this variety are generally high, three pounds or more, under our conditions.  Maturity is mid-season.  Dormancy in this variety is intermediate, which can be an inconvenience.  To store it more than two months, it would probably be best to refrigerate it.  Cruza 148 has very good late blight resistance here, remaining healthy even when surrounded by blighted varieties, but it is known to be vulnerable to newer strains.  Cruza 148 is tetraploid and male fertile and sets a large amount of self pollinated seed under favorable conditions.

TPS of Cruza 148 was open pollinated. I supplemented with bulk pollination, which ought to increase the diversity.  I expect the total range of colors, although probably skewed heavily toward white varieties.  This should be a good mix to search for late blight resistance.