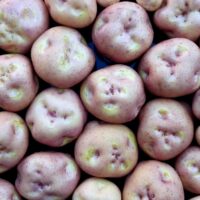 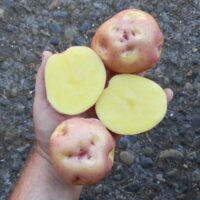 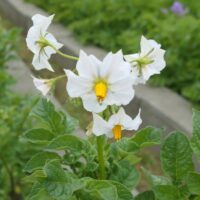 Haynisisoos is a Cultivariable original variety introduced in 2022.  It is notable for good size and yield, strong yellow flesh, and strong sexual fertility.  It is a medium-large, round, pink and yellow bicolor with yellow flesh.  This variety was selected as the best of about 300 seedlings of the Chilean potato variety ‘Amarilla Temprana.’  Color may vary with maturity and soil conditions.  In some cases, most of the pink color in the skin fails to develop and the tubers are a more uniform yellow.

The name is part of a theme, naming new varieties after places in western Washington.

Haynisisoos has dense, starchy flesh and is well suited to a variety of cooking methods, both wet and dry.  Although I generally don’t test it, I suspect that it would fry and chip well.  The skin is thin, so there is no need to peel it in most cases.  This is a fairly conventional variety among my offerings and will stand it well for most of the commercial yellows that you might be familiar with.

Haynisisoos makes a large, but mostly upright plant, growing to about 26 inches.  The stolons are mostly short, with a few stretching out to medium.  It is a late variety, harvestable after about 90 days, but will continue to put on growth for at least a month after that.  Yields have been impressive, averaging just over three pounds per plant, with outliers hitting almost 5.5 pounds.  Dormancy is strong, lasting at least three months.

From a breeding perspective, Haynisisoos flowers heavily, self pollinates, and typically forms a large crop of berries.  It is a female descendant of a variety tested to have A type cytoplasm, so it is reasonable to assume that it also has A type cytoplasm.

Plants appear to have some resistance to late blight, at least of the sort that commonly occurs in late varieties.  It does develop lesions, but the plant typically continues to grow.  Tubers appear to have fair resistance to common scab, but no resistance to powdery scab.  A trial grower reported many odd shaped tubers when grown in dry, poor soil.  As with most varieties, consistent soil moisture will produce the most uniform results.

Haynisisoos TPS was collected in 2022.  I did quite a bit of pollinating with bulk reds, less with blues, and also hit it with pollen from Muru a few times.  So, you could get almost anything from this batch.  Because it is self-fertile, I expect at least half the progeny to be similar overall to the parent.  There ought to be just enough outcrossing to keep things interesting.