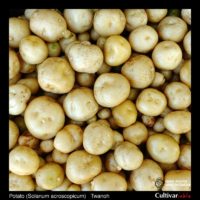 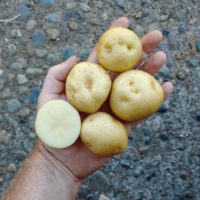 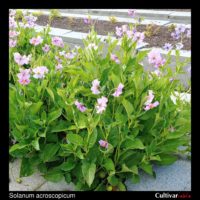 Twanoh is a Cultivariable original variety, introduced in 2019.   It is an unusual potato that I am pretty excited about, although also a mystery.  It may not be what I think it is (more on that below).  This is a different species than the common potato, Solanum tuberosum. Twanoh is a selection of Solanum acroscopicum, a wild potato from Peru. Wild potatoes are often used in breeding with the domesticated potato, but rarely have been improved themselves.  If Twanoh were a regular, domesticated potato, it wouldn’t be particularly impressive.  This isn’t a variety that can compete with S. tuberosum potatoes; it is more of a curiosity for plant nerds, but I hope it is just a first step toward even better cultivars of this species.  This variety may also have some ornamental value, as it is more compact than most potatoes and produces large, light purple flowers for several months.  I could imagine growing it in a flower bed, with a bonus harvest of tubers in the fall.

As a wild species, the genetics are likely to have a lot of differences from the common potato and it is impossible to predict what kind of value might come from that.  Typically, a lot of resistance to pests and diseases is lost through the process of domestication.  Solanum acroscopicum has been noted to have resistance to Colorado potato beetle, early and late blights, potato leafroll virus, potato virus Y, root knot nematode, and wart.  This species has been grown by few people other than potato researchers and very little work has been published about it.  Part of what makes Twanoh exciting is the possibility of discovering new and valuable traits in this potato cousin.

I feel obligated to provide a warning with this variety, but all that I can really warn you against is the unknown.  As far as I know, Solanum acroscopicum has not been used as a food plant in the past.  Typically, wild potatoes are all treated as edible as long as they have a safe level of glycoalkaloids.  Twanoh appears to have low glycoalkaloids, as attested to by its lack of bitterness.  Still, because this species has not been commonly consumed, it could contain something toxic that we don’t know about.  I have eaten quite a bit of it with no complaints, but you should probably start slowly and make sure that it doesn’t disagree with you.  Other than that, I can’t really provide any advice, since there is no way to establish the safety of any food, other than by long experience.  I do not and cannot know if it is equivalent in safety to the domesticated potato.

Thanks to the USDA Potato Introduction Station, which provided the germplasm that was used in breeding this variety.  The name Twanoh was chosen as part of a theme of place names in Western Washington.

Twanoh tubers are round with white skin and flesh.  Total yield averages just about a pound.  Tubers reach a bit more than three inches in diameter, but most are about half that.  The flavor is pleasant, but not distinctive.  The texture is more starchy than waxy, but I think it will probably serve as an all-purpose type.  Like all small potatoes, I prefer this variety roasted in the skin or halved and fried.

One interesting feature of this variety is that it has no bitterness at all, even when the tubers have turned green.  I ate a half pound of green tubers that sat out in the sun for a week and they tasted no different than normal and didn’t make me sick.  The texture was a bit different, presumably as a result of the conversion of starch to sugar, more on the waxy side of the spectrum.  (I still don’t recommend eating greened tubers though, or at least proceeding carefully as the glycoalkaloids in this variety have not been tested, your reaction might not be the same, or the plants might do something different in your environment.  Perhaps I will feel more comfortable making recommendations when this variety has been around for a few years.)

The plants are recognizably potato plants, but different enough that you won’t mistake them easily.  The stems are thinner and the leaves have a characteristic sort of arrow shape.  The branches point upward.  They are smaller plants than most domesticated potatoes, reaching only about a foot tall, so they can be grown on a tighter spacing.  The plants have large, lilac-colored flowers and set berries easily, apparently self-pollinating.  (S. acroscopicum is normally diploid and self-incompatible, but this variety is tetraploid and so has apparently become self-compatible in the same way that tetraploid domesticated potatoes are.)

Twanoh sets its tubers on very short stolons, right under the plant and will benefit from careful attention to hilling since they tend to pile up.  Tuberization is day neutral and the plants are ready to harvest here in about four months (but they might go faster in a warmer climate).  The tuber dormancy is minimal, so seed tubers for planting are best kept in a plastic bag in the refrigerator if it will be a long wait before replanting.  It is probably possible to get more than one crop per year in mild climates, although I haven’t tried it yet.

I am always reluctant to tout resistance in new varieties that I haven’t grown for long, but I feel pretty confident that Twanoh has good resistance to early blight, as I have never seen a lesion on it, even though we have had quite a bit of early blight the last two years.  I can’t test Colorado potato beetle resistance, since we don’t have them here, but if it turns out to be resistant, that would be quite a valuable trait as well.

The TPS of Twanoh is open pollinated and I would guess that it is mostly selfed.  In 2019, Twanoh was grown among regular S. tuberosum potatoes, so there is some possibility of crosses.  Twanoh crosses easily with domesticated tetraploids.  If you find any tubers with skin or flesh color, I think that would be a pretty good indication of a cross.  I expect to see fertility problems with the second generation out of crosses between Twanoh TPS and tetraploid S. tuberosum because the two genomes will become unbalanced in that generation.  One reasonable prediction is that they might be half as fertile.  They also might produce strange progeny with odd or intermediate ploidy due to unbalanced meiosis.  Or, they might have no problems at all, particularly if Twanoh is not what I think it is.