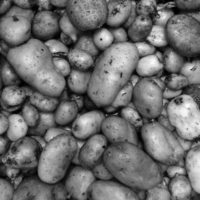 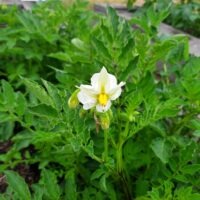 97H32-14 is a breeding line that was developed beginning in 1993 by Kazuyoshi Hosaka of Obihiro Univerisity in collaboration with other potato researchers.  The development of this family of potatoes still continues.  97H32-14 carries the S locus inhibitor (Sli) gene introduced from the wild potato species Solanum chacoense.  The pedigree is (domesticated diploid x (S. chacoense x domesticated diploid)) then two generations of self pollination and one generation of sibling mating.  It has a 75% genetic contribution from a domesticated diploid potato and 25% from S. chacoense.  This variety has a sibling, 97H32-6, that is more commonly used because it passes the Sli gene to progeny at a higher rate.  When I grew both and compared, I found the tubers and total yields were generally larger with this variety in crosses with domesticated diploids.

Diploid domesticated potatoes are self-incompatible, so they cannot be bred to a homozygous state, which would allow for more predictable breeding and the possibility of varieties that grow true from TPS.  By introducing the Sli gene, it becomes possible to self pollinate diploid potatoes.  The number of generations that they can be selfed is usually limited (they eventually become infertile), so you shouldn’t expect to be able to breed to stability, but you can breed for increased homozygosity and more predictable performance in crosses (particularly with another selfed variety).  It is also possible that, if you find just the right starting material, it might be possible to breed it to stability.

It is worth noting that the Sli gene does not overcome the male sterility imposed by type T cytoplasm and, therefore, cannot be used to restore fertility in diploids that were derived from haploid breeding with modern potato varieties.

I put the scary glycoalkaloid warning on this one because it has a recent wild ancestor.  I have not actually found any progeny with bitter tubers.

97H32-14 is intended for breeding use and it is not a potato that you would normally choose to eat.  That said, it produces small, round, white tubers with white flesh.  The texture is all purpose and the flavor is unremarkable.  If you were to find yourself with a large crop of tubers as a result of growing many plants to make crosses, they would be fine to eat.

Plants are medium sized with foliage that looks very clearly intermediate between S. chacoense and domesticated diploid foliage.  The leaves are long with wavy margins.  Stems show blue mottling, indicating that this variety carries a suppressed blue allele.  Tuberization is day neutral but dormancy is low.  Stolons are medium length.  This variety has P type cytoplasm.  I assume that it is homozygous for the Sli gene, based both on the pedigree and my experience with it, but I have not seen that stated explicitly in the research.  Flowering is abundant and prolonged and flowers are good pollen producers, so this variety can be used as both a female and male parent.  Because it is self compatible, it will predominantly self pollinate unless you emasculate the flowers.

I produced two lines of TPS in 2022.  The 97H32-14 S1 seed is self-pollinated.  The primary use of this seed would be to produce Sli gene parents that you can use in crosses.  (So, if you have a diploid potato that you want to inbreed, grow out some of these seeds and then cross your diploid potato with any of the seedlings.  The progeny of that cross should then be self-compatible.)  Most of the seedlings should bear two copies of the gene and all should have at least one copy.  While I expect this seed to be almost entirely self pollinated, I did not protect the plants from outcrossing, so there may be the occasional cross.  If you find a seedling that has domesticated traits, that is probably what happened.

The 97H32-14 x Nemah seed was produced on emasculated flowers pollinated by Nemah.  There will be some self pollinated seed in this batch as well because I didn’t get to every flower before it opened.  Expression of color in the seedlings will clearly identify the crosses.  The use of this seed would be to produce yellow flesh diploids that can be inbred to intensify the flesh color.

There is also a small amount of Nemah x 97H32-14 seed available under the Nemah listing.  I made this seed to compare the use of this variety as both male and female in the cross to see if one is preferable to the other.  Outcomes with this seed should be pretty similar to those of the reciprocal cross.

While the S1 seed will reliably produce Sli gene donors, you will probably want to test progeny from the crosses with Nemah.  Grow the plants under netting to prevent insect pollination and occasionally apply an electric toothbrush to the flowers.  Plants that form berries are likely to be self-compatible.  Self compatible seedlings from the Nemah crosses will be heterozygous, so they will only pass on the self compatibility half of their progeny.  You will need to keep testing them for self-compatibility if you intend to inbreed them further.