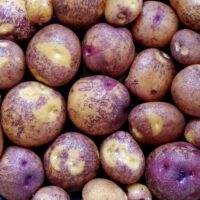 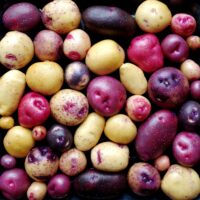 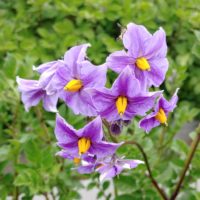 Inka Gold was bred by Carlos Quiros at UC Davis and released in 1994.  This is a potato of complex lineage, including both diploid and tetraploid parents.  It has very yellow flesh and yellow skin, sometimes mottled with purple.  Tubers have fairly thin skin and do not need to be peeled.  Why isn’t this excellent potato more widely grown?  Probably because people shy away from smaller tubers and late maturities.

This is a great tasting potato, with no bitterness, but a rich flavor exclusively found in yellow flesh varieties.  The texture is floury, but reasonably all purpose.  The tubers cook quickly and will come apart if boiled too long.  I much prefer to roast this variety, whole or halved.

This is a large, late variety that can grow very tall.  If you don’t want it to sprawl, you can give it some support to keep it off the ground.  This potato came out of a complex pedigree, going back to European tetraploids on one side and a phureja type diploid on the other and it seems to me that it might have some residual short day response.  It tends to produce much larger tubers on shorter stolons in the fall.  In the summer, stolons often exceed a foot in length.  This variety flowers abundantly and sets seed easily.  I’m not sure that it is male fertile, but it appears to be.

True seed of this variety was open pollinated.  It grew in a block with other yellow flesh tetraploid potatoes, although it was also hand pollinated with bulk pollen.  The majority of the progeny are yellow with spots or spectacles.  There are also some blues and reds.  The flesh color is mostly light yellow, sometimes with a red or blue ring or mottling.  Texture is a mix, but tends toward starchy.  Flavor is generally mild.  Somewhat slow germination, probably indicating that this seed has some dormancy.  In crosses with Nebula, a variety with blue skin and red eyes, this trait was surprisingly abundant.  There is an usually high proportion of low dormancy varieties out of Inka Gold, about 10 to 15%, probably as a consequence of its phureja ancestry.