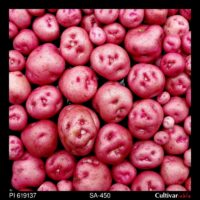 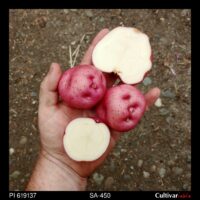 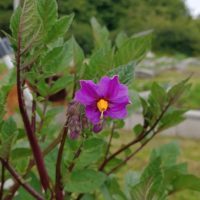 SA-450 is a Peruvian tetraploid potato with red skin and white flesh with excellent flavor.  It produces high yields, even under long day length, which is somewhat uncommon among Andean potatoes.  SA-450 is a collector’s number; while this variety probably has a native name, it has been lost.

SA-450 makes attractive red, smooth-skinned tubers, mostly in the 2 to 4 inch range.  They have a nice, nutty flavor and moist flesh, which would probably be good for boiling and mashing.

Plants are very large, with a late maturity, but they will produce good yields even during the long days of summer here.  I would not be surprised if yields are even better in the fall.  Some of the tubers showed signs of sprouting at harvest, which is fairly common with varieties that prefer short days.  The unsprouted tubers appear to have normal dormancy though.  I saw no signs of scab in this variety.  Flowering is moderate, but the plants flower for a long time – almost three months here – so the berry production is ultimately pretty good.  The flowers appeared to be self-fertile to me.  Plants have a stolon mat, which, in my experience, can help to protect against voles getting at the tubers.

TPS was collected in 2020 and was open pollinated.  Progeny have been overwhelmingly rounds in varying shades of red, from just slightly pink to brick red, with the occasional white.  High tuber counts.  They skew more toward waxy textures, but the full range of textures is present. Somewhat slow germination, probably indicating that this seed has some dormancy.