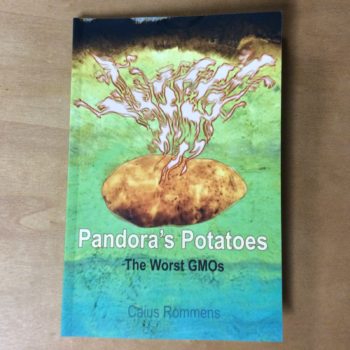 Update: It appears that this book is no longer available from any supplier.  Because the book was so briefly available, I wonder if this post still serves much purpose.  It attracts a lot of hits, but I’m not sure that they are the kinds of hits that I want.

I have recently cleared out many of the comments on this article.  If you want to leave a comment, please be polite.

I recently picked up a new book that should be of particular interest to freelance potato breeders: Pandora’s Potatoes The Worst GMOs by Caius Rommens.  I’ve read more than a few books about genetic engineering, including both technical and political/social discussions.  Through this, I have maintained a fairly neutral outlook.  I have not been particularly worried about GMOs but, at the same time, I am unimpressed with most of what agricultural genetic engineering has produced so far.  The author of Pandora’s Potatoes actually did genetic engineering on potatoes and has now reconsidered his creations.  This makes it a truly unique book.  The world is replete with technical discussions of genetic engineering and debates about the risks and benefits of the technology, but the people involved in these two enterprises rarely intersect.  Pandora’s Potatoes is a rare look at GMO crop breeding from the inside and focused on a crop with which I am intimately familiar, so I was excited to read it and it did not disappoint.  It is a quick read at 71 pages with abundant illustrations and does a good job at keeping the information accessible to the layman without oversimplifying the details.

The introduction should have most independent potato breeders nodding their heads.  It points out that potatoes have historically been a very diverse crop and that uniformity is a modern convention with serious risks and limitations, as any Irish person could attest.  Rommens lays out the main trend that is driving genetic modification in potatoes.  Price is everything with commodity crops and processors have a limited space from which to extract profits.  They can potentially become more competitive and increase profit by introducing new varieties of potatoes that make production more efficient and offer something unique in the market.  To address these goals, he set out to modify the ubiquitous but flawed variety Russet Burbank in four ways: reducing bruising, reducing browning associated with frying, reducing the concentration of the carcinogen acrylamide, and increasing resistance to late blight.  These sound like worthy goals.  They should greatly reduce waste and yield a healthier product in the process.  If they work as intended, that is, and that’s the rub.

Potatoes are somewhat delicate and a large portion of each crop is ultimately discarded due to handling damage.  When potatoes bruise, the flesh darkens and becomes unappealing.  Similarly, when a human is bruised, the skin darkens.  It does so because capillaries have burst under the skin and released red blood cells.  If you wanted to engineer a human that didn’t bruise, you could take a bunch of different approaches.  You could make the skin harder and resistant to damage.  You could increase the strength of the blood vessels so that they would not burst.  You could remove the pigmentation from the blood cells so that the bruise would no longer be apparent.  Of course, in this last case, there would still be damage; it would just be invisible.  This is similar to the method that Rommens used to reduce potato bruising.  He silenced the PPO gene, which prevented the discoloration associated with bruising but not the bruising itself.  Bruising occurs when damage causes cells to rupture and release their contents.  This sets off a chain reaction in the tuber that can eventually lead to spoilage.  The darkening of the flesh, due to deposition of melanin, is a protective response that helps the tuber to resist pathogens that cause spoilage.  In unmodified potatoes, bruised flesh can range from just small differences in flavor and texture to really obvious and unpleasant changes.  In PPO-silenced potatoes, the lack of a melanin response is likely to result in greater levels of damage that just happens to be less detectable.  Rommens contends that farmers don’t care about the actual bruising as long as they still have a marketable product and, therefore, they are likely to treat engineered potatoes less gently, with the unintended consequence of actually increasing the amount of bruised product that reaches the consumer.

He goes on to point out a number of knock-on effects that result from the silencing of the PPO gene.  These include an increase in chaconine-malonyl, a normally uncommon potato glycoalkaloid; a five-fold increase in alpha-aminoadipate, an amino acid with potential neurotoxic effects; and a significant increase in tyramine in bruised tissues, which is probably not a major health concern for most people, but could be for certain vulnerable groups.

Another side effect of PPO silencing is that the tubers will no longer respond to disease by browning.  Blackening of the flesh is a classic indication of late blight, but late blight infected tubers with PPO silencing develop much less discoloration.  This seems like a terrible idea for a variety of reasons, but one of the most important is that blighted tubers develop unsafe levels of glycoalkaloids.  The lack of a visual indicator of infection could be dangerous.  Rommens also points out that the spread of infected tubers is more likely when visual inspection is no longer sufficient to identify diseased lots.

Acrylamide has received a lot of attention in recent years.  It is a carcinogenic substance that forms in potatoes when they are fried.  Nobody wants to consume carcinogens, but the levels in potatoes are pretty low.  It appears to me that you are much more likely to suffer metabolic or cardiovascular problems from overconsuming fried potatoes than you are to get cancer from acrylamide exposure.  Nevertheless, Rommens set out to reduce the concentration of acrylamide in potatoes by silencing the ASN gene.  Unfortunately, the ASN gene is related to the overall uptake and storage of nitrogen and silencing it makes the plants less efficient nitrogen consumers.  So, these varieties have exchanged a dubious risk reduction for a probable reduction in vigor.

I have been mystified by the desire to alter this trait ever since I first read about it.  Potatoes brown when you fry them as a consequence of the Maillard reaction – take an amino acid and a reducing sugar like glucose or fructose, apply heat, and you get a golden-brown French fry.  Most of us probably consider browning just a side-effect of the Maillard reaction; the main effect is intensification of flavor.  So, it seems surprising that anyone would want to reduce this trait.  Rommens explains that the varying levels of glucose and fructose in the tubers lead to inconsistent browning in fried products.  Producers want fries that are completely uniform and the way to get there is to reduce the concentrations of these sugars.  He set out to reduce the levels of these sugars by silencing the INV gene.  Although he does not provide any further data, the conclusion that we are led to draw here is that fried INV-silenced potatoes will have a more consistent, paler color, but will also have reduced flavor.  He also points out that these sugars play a variety of important roles in potatoes and silencing them has side effects such as delayed emergence and a possible reduction in sexual fertility.

Late blight is one of the most problematic diseases of potatoes; it was the proximal cause of the Irish famine and continues to affect potato crops around the world, although most commodity potatoes in the USA are grown in a region where late blight is not usually a major problem.  To introduce strong resistance to late blight, Rommens transplanted a gene from the wild potato species Solanum venturii.  Unfortunately, this resistance is likely to be short-lived and Rommens lays out the usual case for the inevitable failure of strong, vertical resistance.  A potato that has good resistance to late blight is likely to become popular in regions that struggle with the disease.  As farmers grow more of it, this will reduce the genetic diversity of the potato crop in the region and cause increased adaptation pressure on the late blight organism.  Ultimately, the organism will adapt to overcome this resistance as it has done to other resistance genes in the past.

These are only the technical concerns.  Rommens also points out that the use of the VNT gene is a case of biopiracy.  I’m not a fan of the concept of biopiracy.  It makes me nervous.  It is a consideration of a world that I don’t want to live in.  Historically, crops have been the one thing that the world has shared enthusiastically and unreservedly.  Crops bring cuisines and cultures closer together.  A world in which biopiracy is a concern is a world of barriers, protectionism, and hoarding of crops that are our common human heritage.  No living person domesticated those crops and, in most cases, no surviving nation did either.  Unfortunately, we made the mistake of allowing intellectual property into crop breeding, which created the concept of ownership of plants and plant traits.  When one party collects a plant in another part of the world, identifies valuable traits within it, and then obtains intellectual property protections that fence out the native people from using the plant to accomplish the same, we call that biopiracy.  Rommens believes that there should be some form of compensation to Argentina for the use of the Solanum venturii germplasm.  The legality of the case might not be clear, given that much wild potato germplasm was obtained prior to the adoption of the Convention on Biological Diversity which prescribes this kind of benefit sharing and that the USA is not a signatory to the CBD anyway.  I’m more of a radical in this regard.  I am not in favor of allowing patents on plant breeding at all.  And I hope that any researchers in Argentina (or anywhere else for that matter) who want to use this trait will simply give the patent holder the finger and proceed apace.

Set aside for a moment the matter of whether GMO potatoes are safe to consume.  Also set aside whether or not they pose any ecological risks.  These are the typical concerns with GMOs.  Rommens asks a more surprising and compelling question: are these GMO varieties any good?  According to Rommens, they conceal damage and disease.  They probably have inferior flavor.  They may be less vigorous than conventional varieties, yield less, and produce somewhat smaller tubers.  They suffer from high rates of somaclonal variation because the varieties cannot be stabilized through conventional, sexual breeding.  (While GMO varieties can certainly be crossed, the high amount of genetic variation in tetraploid potatoes makes it virtually impossible to obtain progeny that haven’t lost a good portion of the alterations.)

I think Rommens makes a pretty strong case.  Although I still have little doubt that genetic engineering is the future of plant breeding, he has definitely made me much less sanguine about its near-term applications.  These GMO potatoes are commodity types and were never really intended for fresh market use, which is the sort of potato that I focus on, but if I came across one of these varieties in the store, I would definitely avoid it.

I’m sure that writing this book was not without consequence for Rommens’ career and it can’t have been pleasant to repudiate his own work, so he deserves our thanks for discussing these problems so openly.  I highly recommend the book and you can pick up a copy on Amazon.

In the interest of balance and because I lack the qualifications to evaluate many of Rommens’ claims, I am also providing here a link to the J.R. Simplot Company response to the book: