I grow a lot of potatoes.  I like to evaluate new varieties and compare them to my own and I like to make crosses with them and use them for breeding.  Unfortunately, every tuber I bring into my collection is a risk.  I have spent years and quite a bit of money going through my collection to find the varieties that carry viruses and either eliminate or clean them.  I have made some fairly painful sacrifices along the way, discarding irreplaceable varieties.  In fact, I have twice rebooted my potato program largely to purge it of disease.  Just one tuber carrying a virus can put that work at risk.  So, I isolate all new acquisitions and test them.  I’ve now been doing that for several years and I think the results are pretty interesting.  I should point out that this is not remotely a scientific survey.  Not every variety has been tested for every virus.  I also don’t retest anything, so there is always potential for false positives and false negatives.  I test certified tubers less comprehensively and I only test for some viruses when I have particular suspicions about them.  So, this is not a totally level playing field, but there is still something to learn from the results.

First up, we have certified tubers purchased from several on-line suppliers.  The assumption with certified tubers is that they will be only a few generations out of clean foundation stock and therefore relatively free of disease. 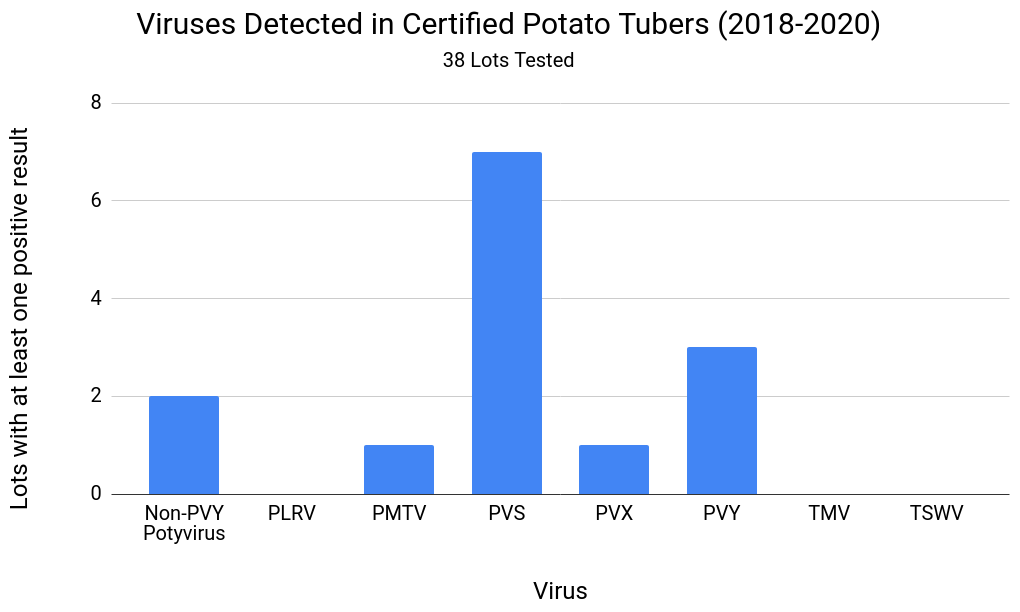 That assumption is generally a safe one, according to my results, with the possible exception of Potato Virus S (PVS).  PVS was detected in 7 of 38 lots, which is 18%.  I should be clear that not every tuber was infected in most cases.  In a one or two pound bag of seed tubers, I might find one to three.  There were some outliers though.  A sack of tubers of German Butterball were nearly all infected.  PVS is generally not considered to be a very serious disease and I think it is allowed in higher amounts in certification programs than most other viruses.  Most varieties tend to coexist with it pretty well and can probably tolerate it indefinitely.

There is enough Potato Virus Y (PVY) circulating in certified tubers to concern me, although probably not an amount that would worry a farmer growing the tubers for only one year and that is really the target customer for certified seed.  Since I am trying to keep my varieties clean, even one instance of an aphid-transmitted virus is too many.  This definitely justifies the cost of testing for me.

Some relative rarities appeared in certified seed.  Non-PVY Potyviruses is probably Potato Virus A.  A positive for Potato Mop-Top Virus (PMTV) was a disturbing finding, since I really want to avoid this soil-persistent virus.  I also found the absences noteworthy.  Potato Virus X (PVX) was once one of the most common viruses, but I only saw one positive for it in three years.  And there was not a single positive for Potato Leafroll Virus (PLRV), another of the once very common potato viruses.  Interestingly, the Non-PVY Potyvirus, PMTV, and PVX results all came from the same supplier.  I will not reveal who that was, but I did inform them.

Now, let’s move on to the wild west of potato propagation: private collections.  I test tubers from private collections more broadly.  Sometimes, I suspect the possibility that tubers may have arrived in this country through less formal routes and I test those tubers yet more broadly.  Tubers of varieties grown from seed get tested about the same as certified tubers. 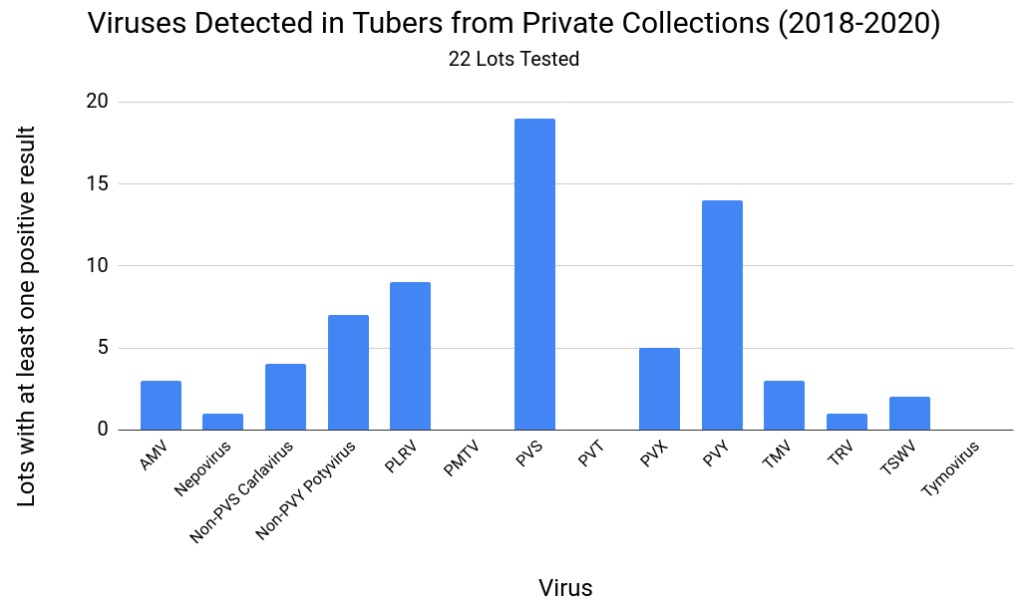 The first thing that should jump right out at you is that 86% of tubers obtained from private collections tested positive for PVS and 63% for PVY.  Yikes!  It is easy to explain why PVS is so prevalent.  It is sneaky.  It is asymptomatic in many varieties and, even when there are symptoms, they are easy to mistake for other things.  PVY has become the primary damaging potato virus in the USA and it is also evolving to become more sneaky.  The once-common but declining potato viruses Potato Leafroll Virus (PVRV) and Potato Virus X (PVX) also showed up in much greater numbers than in certified seed.  Non-PVY Potyvirus is, again, probably Potato Virus A, a fairly common relative of PVY.  Non-PVS Carlavirus is probably Potato Virus M, an uncommon relative of PVS.  Look at all the unusual viruses.  We have Alfalfa Mosaic Virus (AMV), Tobacco Mosaic Virus (TMV), Tobacco Rattle Virus (TRV), and Tomato Spotted Wilt Virus (TSWV).  These tests were only done on varieties that displayed symptoms that could not be explained by other viruses.  On varieties of suspicious origin, I also tested for Nepoviruses, Tymoviruses, and Potato Virus T (PVT), all of which would be very unwelcome in this country.  I did get a positive for a Nepovirus, but didn’t attempt to sort it out.  There are native Nepoviruses in the USA, but there are also nasty foreign ones.  Discretion being the better part of valor, I destroyed those tubers.

If you are wondering what accounts for the big difference between these two groups, it is simply that certified tubers are grown from clean sources and most varieties in private collections never get cleaned.  They live until the virus burden becomes too great and they are abandoned, or they tolerate viruses well enough that they can carry on for many years.

If you are growing potatoes casually and you eat them every year, none of this will matter much to you.  If you are keeping a collection or breeding, best to be careful.  Don’t assume that certified tubers are virus free.  Assume that potatoes from private collections are always infected.  Even if testing is beyond your means, you can grow new varieties in isolation for a year so that they have a chance to show you symptoms.

One thought on “Potato Viruses in Certified and Non-certified Tubers”