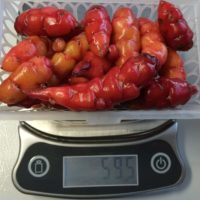 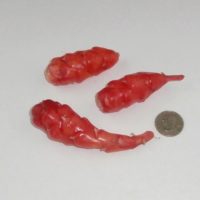 Mexican Red is an heirloom variety from the mountains of southern Mexico.  Oca was originally introduced to Mexico (as far as we know anyway) by the Spanish in the 1700s and has been grown there since.  Apparently there is only this one variety, locally known as papa roja or papa ratona.

Mexican Red is slightly sweet and moderately tart and the flavor is something like a particularly starchy apple or berry.  The cooked texture is soft.  It retains is color fairly well through cooking, becoming a muddy red.

Mexican Red plants are tall and sprawling at maturity.  Tubers are produced on intermediate to long stolons, which means that there is little problem with crowding.  Tuberization photoperiod is about 12 hours, the same as most heirloom varieties.  Average yield is 1.7 pounds.  Maximum tuber length is 5.2 inches and the average tuber length is 2 inches.  The average tuber count is 33.  There are roughly the same number of small and large tubers with this variety.

Mexican Red is a moderate flowerer with a short-styled flower, flowering here in July and August.