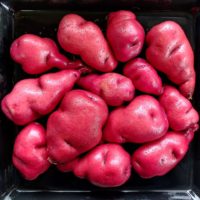 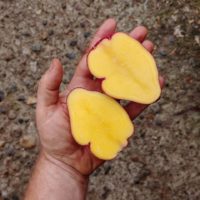 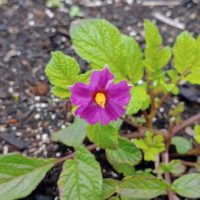 Gunter Red was not what I thought it was and I am not sure to what degree its reality differs from my expectation.  I have now renamed it Mystery Red.  From the cross that produced it, I expected tetraploids.  Instead, Gunter Red is a diploid.  Based on that, the most sensible conclusion would be that Gunter Red is not a descendant of Johnny Gunter at all.  And yet, I am sure about the seeds and sure about the seedlings planted in the bed where it was first grown.  I have photographs of the seedling, its location, and the seedling harvest.  Still, there are many places where uncertainty can creep in.  Perhaps a seed of something else was caught up in the processing gear.  Perhaps I transplanted the wrong seedling to the wrong bed.  Perhaps an animal moved a tuber or a chance seed germinated in place.  It is also possible, although pretty unlikely, that the cross produced diploid progeny.  So, I don’t know if Gunter Red actually has any Gunter in it and I will probably never know.  This sort of thing isn’t that unusual.  Many of the varieties with published pedigrees when analyzed later have turned out to be inconsistent with those pedigrees.  So, Gunter Red may be one of those happy accidents of plant breeding.

Mystery Red is a Cultivariable original variety, selected in 2019. It is a medium-sized diploid with red skin and yellow flesh. I think it is among the most delicious potatoes that I have selected.  The intended female parent was Gunter Gold, a selection made from the Pacific Northwest heirloom variety Johnny Gunter, and the intended male parent was a selection out of Careta Amarilla, a Colombian diploid potato with intense yellow flesh. Germplasm supplied by the USDA Potato Introduction Station was used in breeding this variety.  As noted above, I can’t be sure that either one of these parents was actually involved.

Mystery Red is a starchy potato with light, floury, deep yellow flesh.  It is is particularly great roasted, but it also fries well.  Tubers range mostly between three and six inches.  The skin is thin, so there is no need to peel it for most kinds of dishes.  I think the flavor ranks among the best potatoes that I have ever tasted.

Try this: Cut the potatoes in half, grease a pan, set the potatoes cut side down, and roast at 425 degrees for 15 minutes.  You’ll understand why you’re lucky that I sell any of these instead of keeping them all to eat!

Mystery Red is a day neutral tuberizer with a late maturity.  It is harvestable after about 100 days, but will continue to grow until killed by frost.  At full maturity, plants typically yield about three pounds.  The tubers have poor dormancy and seed tubers may need to be refrigerated or stored under lights to keep through long winters.  Flowers are self incompatible and will require a pollinator to set seed.  Mystery Red has some minor resistance to late blight, largely as a result of its late maturity.  The rate of plant growth tends to outpace blight, which mostly affects the lower foliage.  This is a common pattern seen in late potatoes.  It does withstand blight well enough to produce a good yield here, but it does so while carrying a lot of lesions.

TPS of Mystery Red is open pollinated.  It was grown in a block with other yellow fleshed varieties, but with the likelihood of pollen also coming from farther afield, it should be quite diverse.  I expect the majority of the progeny to produce large, late plants.  Many will have yellow flesh.