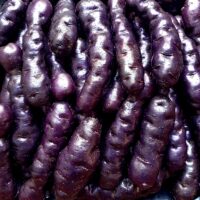 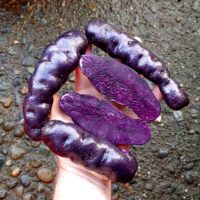 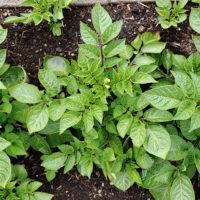 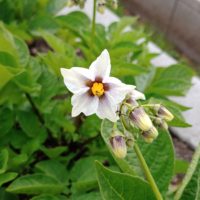 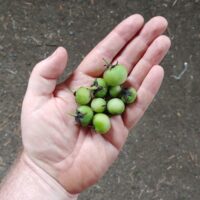 To-Le-Ak (alternatively Toleak or Toleac) is a Pacific Northwest heirloom variety with a unique history. It has been grown by the Quileute people, near La Push, Washington long enough that its origin is unknown.  Unlike Ozette, also a Pacific Northwest heirloom variety from the Olympic Peninsula, the history of To-Le-Ak is much less clear.  It may have been grown following an original Spanish introduction, like Ozette, or it may be a more modern introduction.  It wouldn’t be surprising if it was introduced at the same time as Ozette, but there really isn’t sufficient information to make a determination and we will probably never know.

Overall, To-Le-Ak appears to be synonymous with the more common potato varieties Elmer’s Blue and Purple Peruvian.  It appears that To-Le-Ak may have slightly darker flesh than Purple Peruvian and has speckled berries whereas Purple Peruvian berries appear to be non-speckled.  Otherwise, the morphological characteristics of these three are nearly indistinguishable when grown in the same conditions.  Elmer’s Blue and Purple Peruvian have been fingerprinted and had identical markers.  Markers also showed that Purple Peruvian had the same genetic fingerprint as the European variety Vitelotte Noire.  We also don’t know the origin of these varieties, so To-Le-Ak could have been first, with these names added later, or it could have been introduced and renamed by the Quileute.  Regardless of name, Purple Peruvian and its known synonyms have T type cytoplasm and cluster in genetic analysis with landrace potatoes from Chiloe Island, which marks them as native Chilean potatoes or their descendants.  To-Le-Ak could be a separate introduction of a variety also brought to Europe.

My take on this potato is that it probably the same as the commonly available Purple Peruvian, but I can’t be sure and, even with genotyping, we would not be able to tell if there are somatic mutations in this variety, possibly giving it better adaptation to Pacific Northwest conditions.  Since Pacific Northwest heirloom potatoes are one of my interests, I am continuing to grow and maintain it, but I don’t grow a lot. If you aren’t a purist, you can get pretty much the same experience growing Purple Peruvian, which is available from many seed potato suppliers more frequently, in larger quantities, and at a lower price.

To-Le-Ak has floury flesh, better roasted or fried than boiled.  It has a strong and complex flavor, somewhat bitter, as is the case with many blue-fleshed potatoes.  The at least very closely related variety Purple Peruvian has higher glycoalkaloids than most modern potatoes, which likely accounts for the bitter flavors.

To-Le-Ak is a late variety, which can be harvested mid-season for a more fingerling shaped potato or at full maturity for larger, more oval potatoes.  The eyes are moderately deep.  Stolons are long, often reaching more than a foot.  Plants are compact in dry conditions, sprawling in wet.  Yields average 2 pounds per plant under our conditions, but can be considerably larger with regular irrigation or a very late harvest (November/December).  Tubers have strong dormancy.  In my experience, the plants have yielded reasonably well even when infected with multiple viruses.  The foliage does not appear to have any resistance to late blight.  Tubers are vulnerable to scab under dry conditions.  To-Le-Ak has little to no late blight resistance and plants will not survive active infection for long.

To-Le-Ak is a shy flowerer, and drops most of the flowers that do form, so it rarely produces any berries.  This is one of the few varieties that seems to set seed better in other climates and some customers have reported getting berries.  Until recently, this variety was infected with multiple viruses, which probably suppressed flowering and fruiting, so the situation may be improved now that it is virus free.

To-Le-Ak is male sterile, so seed produces diverse progeny due to cross-pollination.  I have observed mostly blues and whites in round and oval shapes.  Progeny have typically been much more fertile than To-Le-Ak.