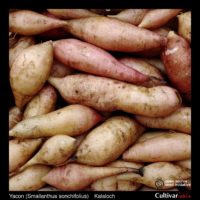 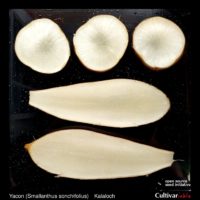 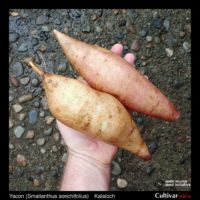 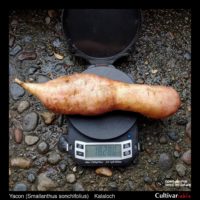 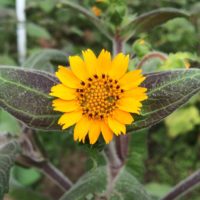 Kalaloch is the second new yacon variety from our yacon breeding project.  It was an open pollinated seedling of the variety Cajamarca.  I’m guessing that the cross was probably Cajamarca x Bekya based on the traits that it shares with both varieties, but we’ll probably never know for certain.

There is a lot to like in this variety, but I selected it for release based on the fact that it is an early flowerer and carries the genetics of Cajamarca, which is a difficult variety to work with.  It is about a month earlier to flower and form tubers than the next earliest variety, Bekya.  The roots are medium sized, white/tan, and sweet, smaller but otherwise similar to Cajamarca.  It sets seed with a compatible pollinator.  It is medium to tall with green stems.  It isn’t a particularly high yielding variety, but I think it will be a good variety for climates with shorter growing seasons.  It will probably do better in containers than larger varieties.  The smaller root balls are also a lot easier to harvest than those of heavy yielding varieties and smaller roots are a more practical size for fresh eating than two-pound monsters.

What you will receive:

You will receive the stated number of rhizome pieces, packed in damp peat.  You should keep packets refrigerated and check them periodically to make sure that the exposed cuts are not molding. If mold develops, cut back to clean flesh and plant or pot as soon as possible. Rhizome does not store well, so it is always better to plant it than to store it if you can.

Seeds are open pollinated. Because yacon is a polyploid hybrid, the seeds will not grow true to type. They are suitable for use in breeding or conservation efforts and could be used to select varieties similar to the parent type.