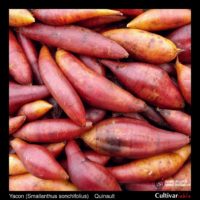 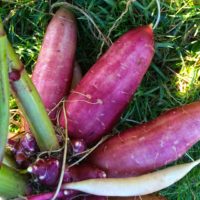 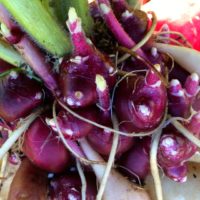 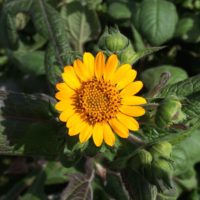 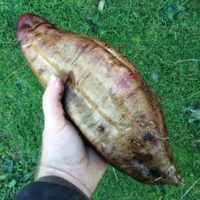 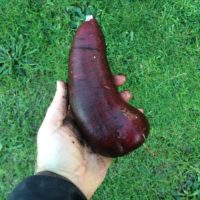 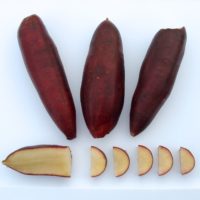 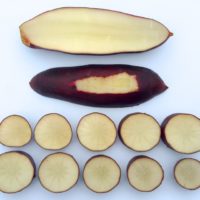 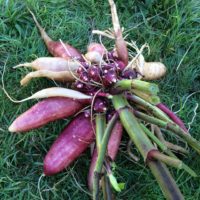 Quinault is the first new variety that was introduced from our breeding program, grown from open pollinated seed of the variety ‘Rojo’ at a time when yacon was still widely regarded as a completely sterile plant.  Mature tubers come out of the ground a light/red purple, sometimes partly tan, but become the darkest red of any variety that we grow after a couple weeks of exposure.  Plants are of medium height, usually reaching between five and six feet here by the end of the growing season.

Quinault is a perfectly nice variety, but one that doesn’t measure up to my later selections.  The yield is generally lower and the flavor is sweet, but not as sweet at harvest as my sweetest selections.  I actually prefer the mid-sweet yacons to the fully sweet varieties, so this is often one of the first varieties that I eat.  The main reason that I released this variety is simply that there had never been a seed grown variety produced in North America and very few anywhere in the world.  It is early to flower, at about 155 days and has greatly improved seed set and pollen production compared to the heirloom varieties.  Unfortunately, germination rate of the seeds that it produces is lower than most of our later seed-grown varieties (although still superior to the heirloom varieties).

So, Quinault is a variety that has been largely surpassed by the next generation of new yacons, but I still keep a few plants for breeding use and offer singles when I have enough excess.