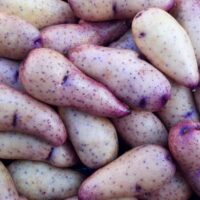 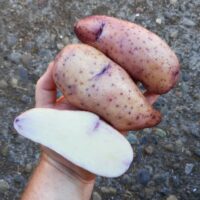 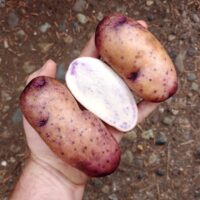 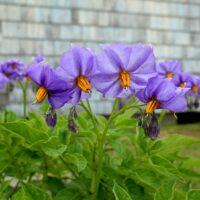 It’s fair to say that this isn’t the most beautiful potato that I have ever produced, but it is an interesting one. This is a cross of Twanoh x Negro y Azul. Twanoh is (most likely) a hybrid of S. tuberosum and S. acroscopicum. It is tetraploid and I expected that it would cross with domesticated tetraploids, but open pollinated seeds all produced seedlings that looked very similar to Twanoh. So, as an experiment, I emasculated some flowers and pollinated them with Negro y Azul, a very dark blue potato, in the hope that I would get some seeds and also to see how Twanoh would respond to blue genetics. I did get seeds, but less than 20 per berry, which is interesting in itself. Of the 64 seedlings that I planted out, about half were round and half oval and only three of them showed any color. This one had the most color, good flavor and texture, and some other interesting traits, so I’m keeping it around for further evaluation.

Twanoh y Azul has light, floury flesh.  The flavor is great, well rounded and savory with just the right balance of bitter elements to keep it from being insipid.  I would rank this among the best tasting varieties that I have selected.  I have also noticed that it has a particularly nice aroma.  The tubers tend to be large and oval and, while not huge, would be suitable for baking.  I haven’t tried it, but it would probably make a decent fry.

I haven’t been growing this one long enough to have a handle on its stats.  This is a late variety, running about four months here.  It would probably be a bit faster in a warmer climate.  I have seen per plant yields in excess of four pounds, but I don’t yet have an average from a full row, so that may not hold up.    The majority of the tubers have been in the 5-7 ounce range.  Dormancy is not great, but good enough.  I saw sprouting at about three months.  Plants are vulnerable to late blight.  This is a heavy flowerer and inherited both the large, robust flowers characteristic of Twanoh and the colored anthers of Negro y Azul, so I think it is a particularly attractive plant.  The flowers are abundant pollen producers, so it should be easy to both save TPS and use it for breeding.

This variety has quite a diverse background.  One parent was Twanoh, which is probably at least half Solanum acroscopicum.  It is hard to guess how much S. acroscopicum may have made it into Twanoh y Azul, because the two different genomes of S. acroscopicum and S. tuberosum don’t tend to intermix.  Twanoh y Azul could potentially be as much as 50% S. acroscopicum or as little as zero.  The more predictable parent is Negro y Azul, which brings in both high production domesticated genetics and a contribution from S. chacoense, so I think there could be really interesting results from the TPS.  I haven’t grown any yet, so, whatever you get, you will be among the first to see it.  In 2022, I first collected pollen from Twanoh y Azul and then returned to apply bulk pollen, so I expect that the majority of the TPS will be selfed, with a smaller portion of widely outcrossed seed.