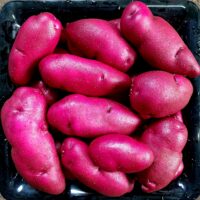 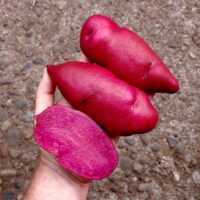 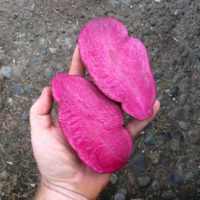 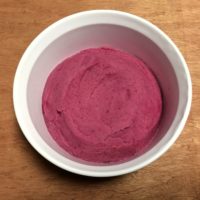 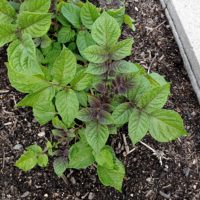 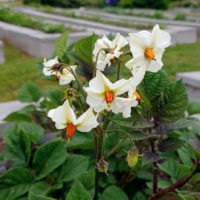 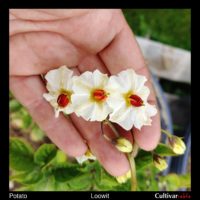 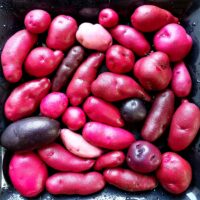 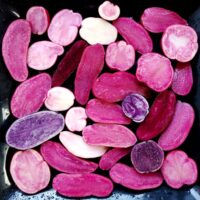 Loowit is the result of a breeding project in collaboration with Tom Wagner, produced by crossing Tom’s variety Mt. St. Helens and a Bolivian diploid potato. This is a good all-purpose potato with intense red flesh. In cool climates, the flesh should look just like the pictures. In hotter climates, the color may be more pink or pink with light yellow patches. This is not a problem particular to this variety, but is true of all potatoes with red or blue flesh; anthocyanin content is affected by temperature. Red flesh in potatoes is produced by the compound pelargonidin, an anthocyanin that has antioxidant properties and is found in many red fruits, such as raspberries, strawberries, and pomegranates.

Loowit is most suitable for baking and roasting. It can also be boiled, but like a lot of all-purpose types, you must avoid extended boiling or it will fall apart. It holds its color very well when baked or roasted, but washes out a bit when boiled. Still, it makes some really incredible looking mashed potatoes. Like many potatoes with dark blue or red flesh, it has a fairly intense flavor, with a hint of bitterness. Most people do not detect this as bitterness, but just describe it as “potato” flavor, but people who are very sensitive to bitter flavors might not like it. I think it has great flavor, but I tend to favor varieties that have some bitterness.

This is a late season potato.  I previously described it as mid season, but this turned out to be the result of being infected with PVY.  Tubers are mostly in the three to six inch range at maturity.  Yields here range 2 to 3 pounds per plant.  Dormancy is about three months, a bit less than most commercial potatoes, probably owing to its diploid parent.  With low temperature storage, you can easily keep seed tubers alive (although sprouting) out to five months.  Flowers are male fertile but produce very little pollen.  It will set a better crop of berries if you vibrate the flowers or pollinate with another variety.  The good news is that progeny of Loowit, even when selfed, tend to be much better pollen producers.

This variety has performed well here against early and late blight. It is fairly vulnerable to scab, so if you have ground that is scabby, it is probably not the best choice.

TPS of Loowit is open pollinated and the majority of the progeny should be self pollinated. I also pollinated it regularly with bulk pollen from red flesh varieties, blue flesh varieties, and Solanum curtilobum.  Progeny are overwhelmingly red with red flesh, with a much smaller number of blue with blue flesh, pinks, and the occasional white.  Most are late and yields range widely from a few ounces to a few pounds.  More of the progeny of a waxy texture than floury, but both are in the mix.  Some of the most intensely colored have a bitter flavor, but this flavor is most likely the result of high anthocyanin content rather than glycoalkaloids.  I find that glycokalkoid bitterness lingers, while anthocyanin bitterness does not.  Pretty fast and uniform germination for a tetraploid.  Most seedlings were up in eight days.

Germplasm supplied by the USDA Potato Introduction Station was used in breeding this variety.