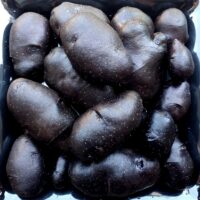 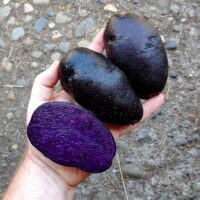 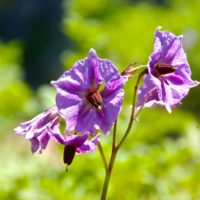 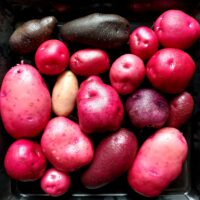 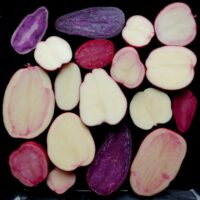 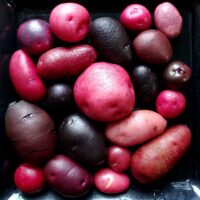 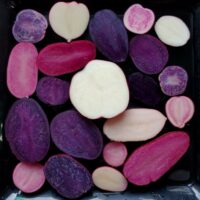 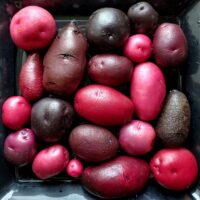 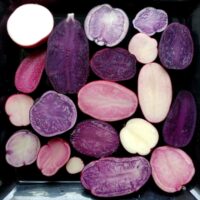 Azul Toro is one of Tom Wagner‘s more famous potato varieties and deservedly so.  It is a heavy producer of medium sized tubers with dark blue skin and flesh and excellent flavor.  Tom created this variety in 1995 from a cross of his varieties Negro y Azul and Kern Toro.  It was recommended in several of Carol Deppe’s books, which has sustained interest in this potato 25 years on.

Unlike tomatoes, which grow true from seed, potato varieties must be grown every year to survive and they also need to be periodically cultured in a laboratory to free them of viruses.  Because of this, the majority of Tom’s potato varieties have been lost.  In many cases, even his most popular varieties are now grown by only a few people, since they have accumulated viruses and become unproductive over the years.  Azul Toro was last grown at field scale in 2007.  When I tested a plant from the last remaining source before cleanup, it was positive for five viruses: Potato Leafroll Virus, and Potato Viruses A, S, X, and Y.  The fact that it still produced reasonably well with such a virus burden may indicate that it has particularly good resistance.  As of May, 2020, this variety has now tested completely virus free and I am growing a crop of foundation seed.  I expect to have it available again in 2021.

Azul Toro is a multi-purpose type, with fairly moist flesh, and has excellent flavor for a blue.  It roasts and boils about equally well and lacks the slightly bitter aftertaste so often present in blue potatoes.  Tubers are oblong, mostly in the four to five inch range, with the occasional monster tuber up to ten inches long.  The largest tubers tend to get a bit lumpy, but most of the tubers are smooth and uniform.  When grown under cool temperatures, the flesh is a vivid, solid blue.  At higher soil temperatures, it is more muted, as is the case for all varieties with blue or red flesh.  It retains most of the color in cooking, coming out a lighter but still solid blue.

This is an early to mid-season potato, reported to yield in about 75-90 days from emergence in warmer climates, but about 100 days here.  It also has spectacular looking flowers and produces fertile pollen.  It has a complex pedigree going back to a Solanum chacoense hybrid among other things and has a reputation for heat tolerance.  It may also have some resistance to Colorado potato beetles through that heritage.  Stolons can be rather long on this variety, reaching out a foot or more.  This is a tetraploid variety with excellent dormancy.

True seed is open pollinated.  Azul Toro is self-compatible, but not a great pollen producer, so I expect these seeds to be a pretty even mix of self- and cross-pollinated.  Azul Toro has given a mix of blue with blue flesh, blue with white flesh, red with red flesh, red with white flesh and the occasional white or light pink.  Maturities split about 50/50 for early and late.  Somewhat slow germination, probably indicating that this seed has some dormancy.  I don’t have a ton of this seed, as Azul Toro produces a relatively small number of berries.