This continues to be an exciting year on the ulluco front.  We have had a total of 8 seeds germinate, one as recently as last week.  The first four plants survived the fragile stage and are now vigorous and healthy, having reached perhaps half of their ultimate size (assuming that they do not grow larger than the parent varieties).  One was lost to a bird.  Another has been consistently weak and has grown very little, so I expect to lose it eventually.  The two most recent are doing well, but are still very small and will have to be grown in the greenhouse.

In addition to our plants, my friend Philip managed to get two seedlings from about 100 seeds that we sent to him, which brings the total to ten for the year from our seeds.  To top that off, another friend in New Zealand was able to get a seedling from seed that he saved himself.  That’s really great news!

Here is a look at the first four plants, all of which are doing very well.  They are all flowering strongly and I am starting to see the first signs of seed set, so I expect that I will be harvesting a second generation of seeds starting in about three weeks.

This is the first ulluco seedling, born on February 6th.  We have three plants of this variety, from cuttings that I took early on.  I scared myself when the wound from one of the cuttings got moldy and didn’t take any more, so this is the only plant that I have propagated.  I’m just going to be patient with the rest.  It is hard to tell since ulluco hides its flowers, but this is an extremely floriferous variety.  There are hundreds of flowers on this plant.

This is what they look like.  Yellow-green with purple tips.  The flower and stem of this variety are very similar to BK10425.2, one of the probable parents. 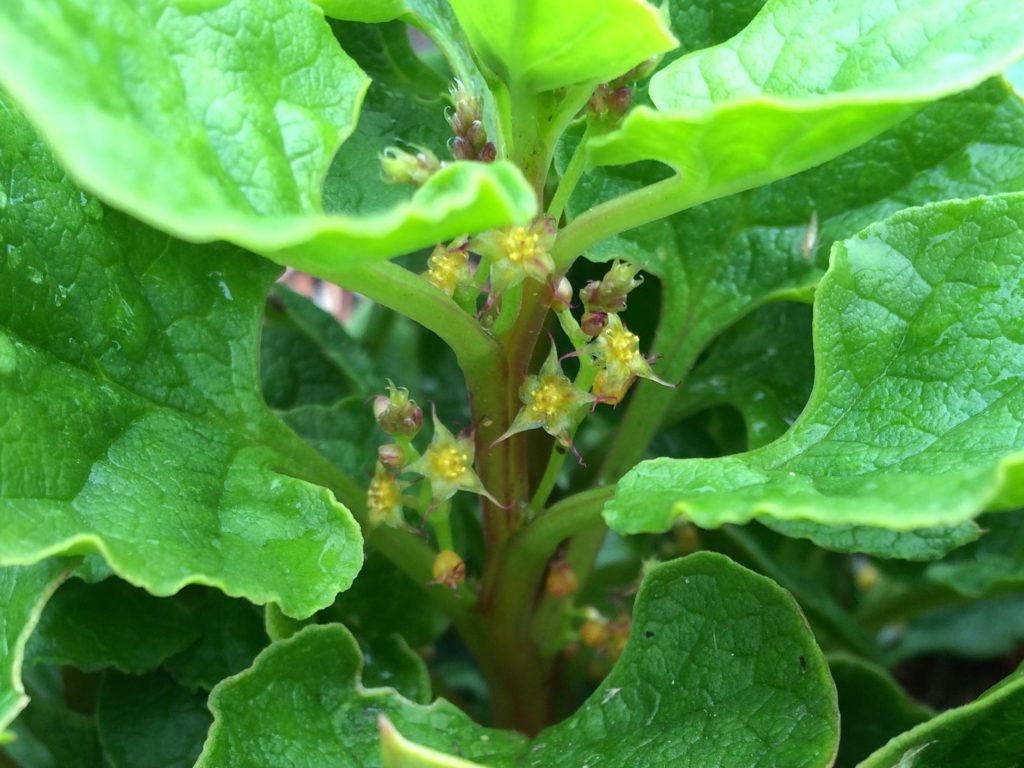 This is the second seedling, born on March 14th.  It has red stems and an interesting wrinkled leaf margin.  I can’t clearly associate these traits with any of the parent varieties, although the only parent variety with red stems that set many seeds was Chugua Roja.

Once again, a yellow-green flower with purple tips, although the tips are more pronounced here. 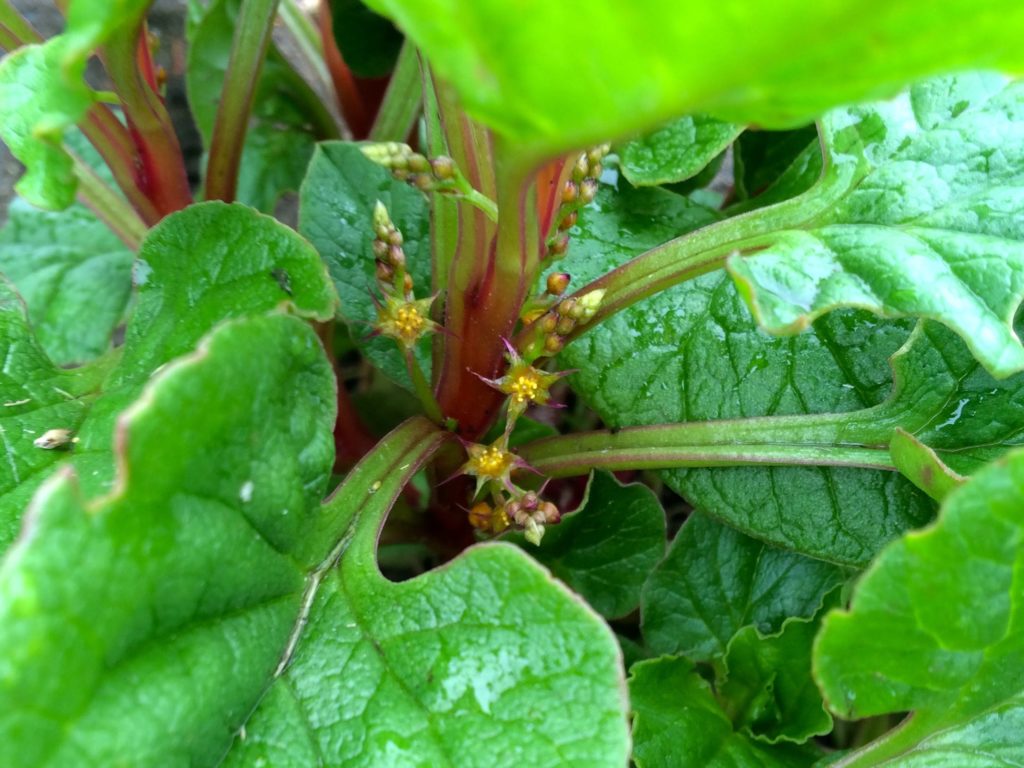 The third seedling, also born on March 14th.  This has been the fastest growing of all the seedlings and has outpaced all of the tuber-grown varieties that were planted about the same.  Another red-stemmed plant.  This one has been slow to flower, but is starting to open a few now.

A mostly yellow-green flower on this one.  Little to no tip coloration.  Very pretty stems. 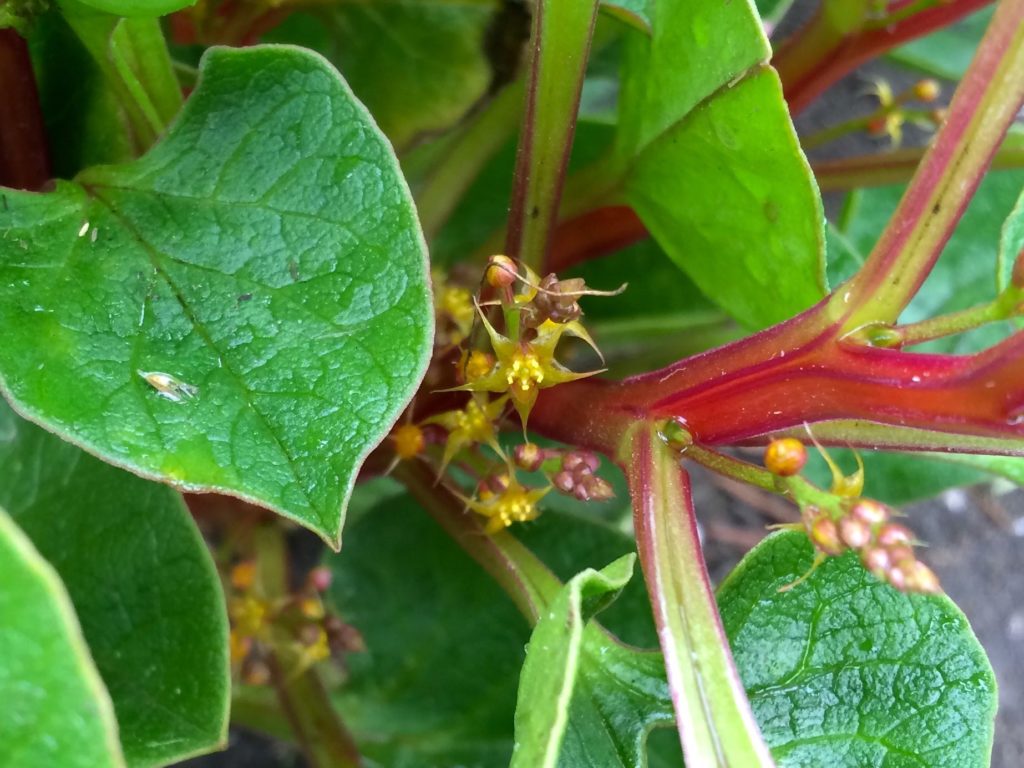 The fourth seedling, born on March 20th.  Back in May, I thought that we were going to lose this plant.  Not long after being transplanted out, it developed lesions on the leaves, went limp and fell over.  It then sprouted a new stem and grew into an apparently healthy plant.  It hasn’t caught up with the rest, but it is looking very good, all things considered.

It is an abundant flowerer, keeping in style with this year’s trend of yellow-green flowers with purple tips.  This is another that bears quite a bit of resemblance to the champion seed-setting variety BK10425.2.

I couldn’t be happier with how these first four have turned out so far.  They are raising my hopes for an impressive harvest this fall.