Nature is a good teacher.  One of the most valuable lessons that it teaches is the degree to which we take our powers of observation for granted.  In reality, observation is not a passive activity.  When we observe passively, the brain takes shortcuts.  That is the only explanation I have for the fact that I have walked past this yacon plant every day for more than a month: 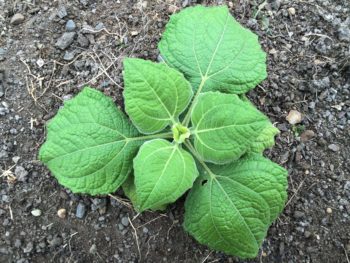 Normally, yacon leaves are arranged opposite and decussate; they are found in pairs on opposite sides of the stem and the each pair is offset 90 degrees, such that two pairs of leaves form an X.  Here, the leaves are whorled and offset at 60 degrees.

I’ve never noticed this before, but it can’t be that uncommon, because once I knew what to look for, I was able to find two other plants with this leaf arrangement: 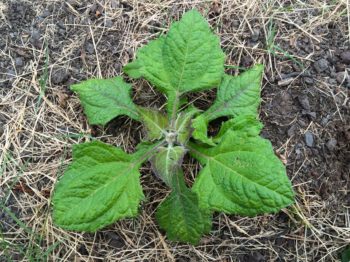 I supposed that if I found any more three-leafed plants, they would be in the same variety as the first, Cajamarca, probably having arisen from a mutation or meristem defect in a single plant last year.  That hypothesis lasted about 90 seconds.  The next plant that I found was in the variety Late Red. 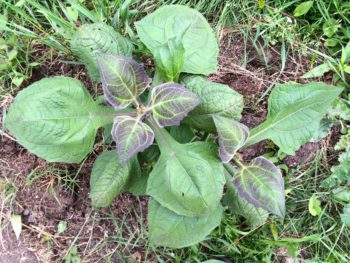 The third and last such plant that I found was in the variety New Zealand.  You can see that this plant has both a normal stem and a whorled stem.

Who knows how many years I have been walking past three-leafed yacon plants without noticing?  Maybe you have been too.

It may be possible to isolate clone lines with only three-leafed stems from these plants.  Would that be useful or desirable?  There’s probably only one way to find out.

One thought on “Yacon: Leaves of Three, Let Them Be”