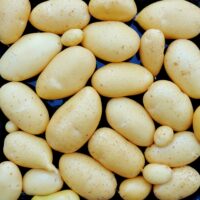 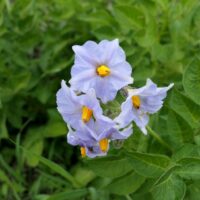 There aren’t many European potato varieties that survived the introduction of late blight that led to the Irish Potato Famine in 1845.  Lumper is probably the best known of these, but Myatt’s Ashleaf may predate it, with some accounts indicating an introduction as early as 1804.  The early European potatoes were mostly derived from Andean varieties.  These varieties lacked resistance to late blight and quickly went extinct after 1845.  They were replaced by Chilean potatoes, which became the basis of potato breeding in Europe and the United States from then on.

Although none of the old European potatoes are particularly practical choices to grow, due to their lack of disease resistance, this would be my choice if you wanted to grow one.  Myatt’s Ashleaf has a better texture and flavor than Lumper and it has the rare combination of early maturity and heavy berry production.  It is fertile, day neutral, and has excellent dormancy, so it can be a valuable parent in crosses with short day Andean potatoes.

The name of this variety is a bit curious, since most potatoes could be regarded as having a form similar to ash leaves.  On the other hand, this may have been distinctive at the time that it was introduced, since potatoes of Andean origin would have been more common in Europe and many of those have narrower leaflets.  Synonyms include Ashleaf Kidney, Carter’s Early Ashleaf, Early Short Top, Gloucester Kidney, Harrison’s Early Short Top, Improved Early Ashleaf, Muisjes, Myatt’s Prolific Ashleaf, Old Scotch Ashleaf, River’s Ashleaf, Royal Ashleaf, Veitch’s Early Ashleaf, Veitch’s Improved Ashleaf, and Webb’s Improved Ashleaf.

Myatt’s Ashleaf produces medium sized oval to kidney shaped potatoes with good flavor and a somewhat waxy texture. The eyes are shallow and the flesh is light yellow.  This is a versatile potato that can be used for most purposes and does very well boiled or mashed.

Myatt’s Ashleaf plants are compact and have an early to mid-season maturity.

This variety is self fertile and flowers abundantly, setting seed fairly easily.  That said, it doesn’t produce a lot of pollen, so it will benefit from hand pollination if you want to produce seed and don’t mind if it is crossed.  It has type A cytoplasm, consistent with an Andean origin, although there is some evidence that it might be a hybrid with some Chilean ancestry.  It is one of the few remaining European varieties with Andean cytoplasm (along with Lumper, Pink Fir Apple, and Fifty Fold).  Andean potatoes largely have cytoplasm in the M-A-P complex, which does not impose male sterility.

This variety is difficult to maintain.  It has no resistance to most of the common potato diseases.  Blight is typically the main problem, but it also accumulates viruses easily and is very vulnerable to the common Potato Virus Y.  It is also fairly vulnerable to scab under dry conditions.  It does have multi-gene resistance to wart.

True seed of this variety was open pollinated and probably mostly selfed, although I pollinate all plants with mixed pollen, so there should be some outcrossing as well.  It should be a good source of genetics for breeding without the difficulty of keeping the tubers disease free.  Self pollinated seedlings are pretty uniform in their characteristics, at least to the same extent as the F1 TPS varieties that I have tried.  These seeds were bulk pollinated, so I expect more to be outcrossed than selfed.