Skip to content
Mashua (Tropaeolum tuberosum) is one of the few Andean root crops that is reportedly easy to grow from seed.  It is happy self- or cross-pollinating and produces lots of flowers which grow into clusters of 3 to 4 seeds.  The seeds are regarded as easy to germinate.  They come up sometimes as volunteers in mild climates.  They are said to have low or no dormancy.  You won’t find much more information than that on the subject.  It’s “easy,” but apparently not many people haven’t really tried it or written much about it if they did.
I agree that it is easy to get mashua to start making seeds.  My plants have done a lot of that.  The problem is getting them to mature.  Mashua starts making seeds relatively late in the year and they take quite a while to mature.  Around here, they need to make it to about mid-December.  The plants are frost sensitive and I rarely obtain much of seed crop before the plants gets frozen out.  The past few years, I have collected less than 20 seeds and lost hundreds or thousands in the process of maturing.
I spent quite a bit of time making crosses least year, planning to skin a hoop house over the plants before cold weather arrived.  Unfortunately, we were surprised in November by a hard freeze on a night with a predicted low of 40 degrees and that was the end of most of my mashua seed crop.  I had picked a few dozen seeds early as a bit of insurance.  I wasn’t sure whether they were sufficiently mature, but I sowed them and a few dozen more received in trade back in December.  And waited.
By the time March came around, I started to despair that my seeds were not going to germinate.  I know from past attempts that only the largest seeds usually germinate and I wasn’t sure these were mature enough.  I put the tray on the lowest shelf of the greenhouse, where seedling trays go to die.  A couple weeks ago, I saw a mashua seed pushed up from the surface of the soil and pulled it out to find a radicle emerging.  More careful examination revealed 5 more, so it looks like I am going to have some more new mashuas this year. 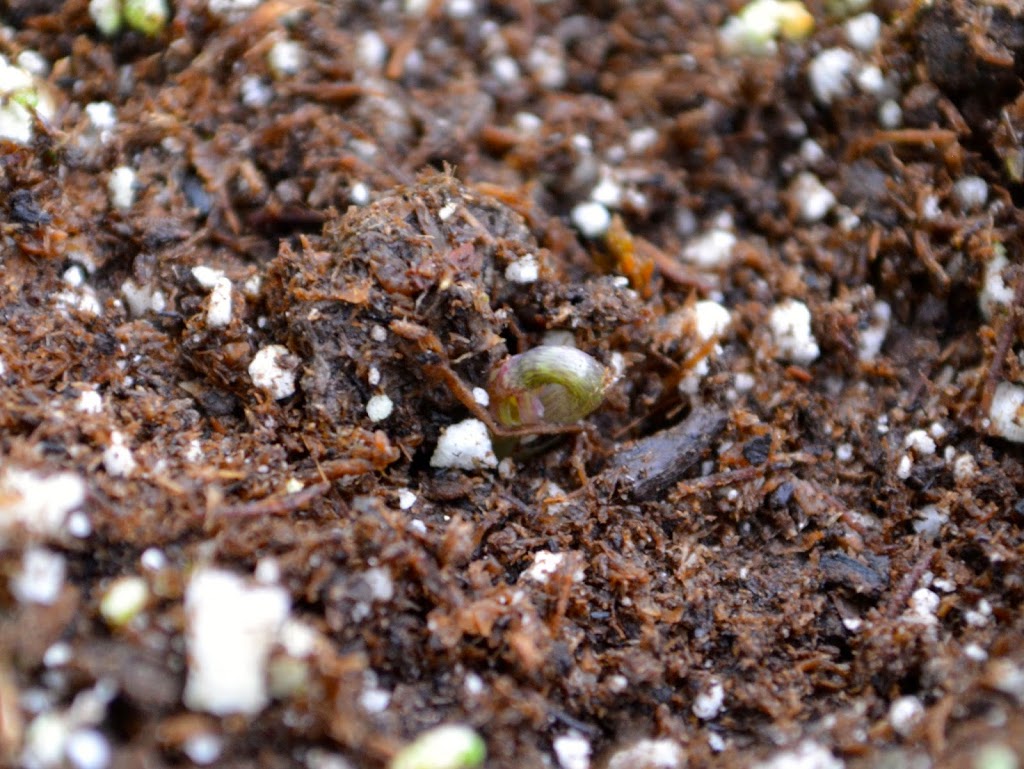 It still took quite some time to see any growth.  Two weeks later, the first bit of green appeared.  Mashua cotyledons remain below ground, so it takes the plant a while to form a true stem and leaves. By the time a mashua seeding breaks the surface, it has probably been growing for a week or more. 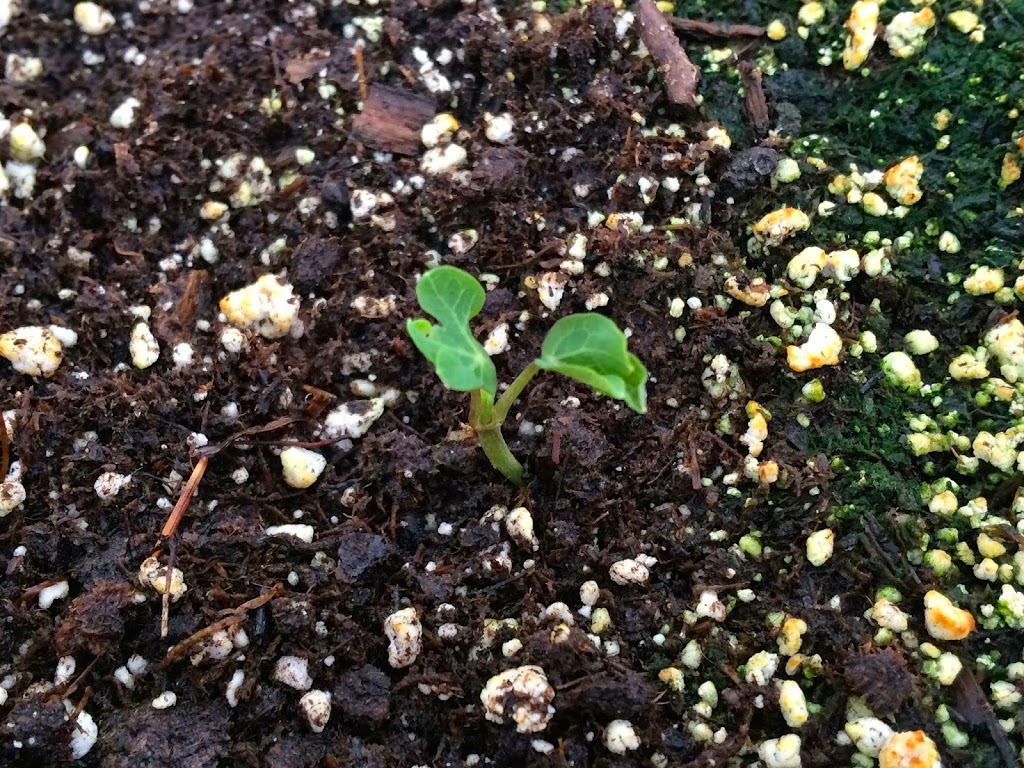 This mashua, a Ken Aslet x Orange cross, is the farthest along.  It looks happy enough.  I have high hopes for mashua breeding.  At minimum, I would like to see a mashua with the size and color of Orange, but the early flowering and tuber formation of Ken Aslet.  Even that would be just an intermediate step, because my mashua breeding project has one simple, overarching goal: improved flavor. 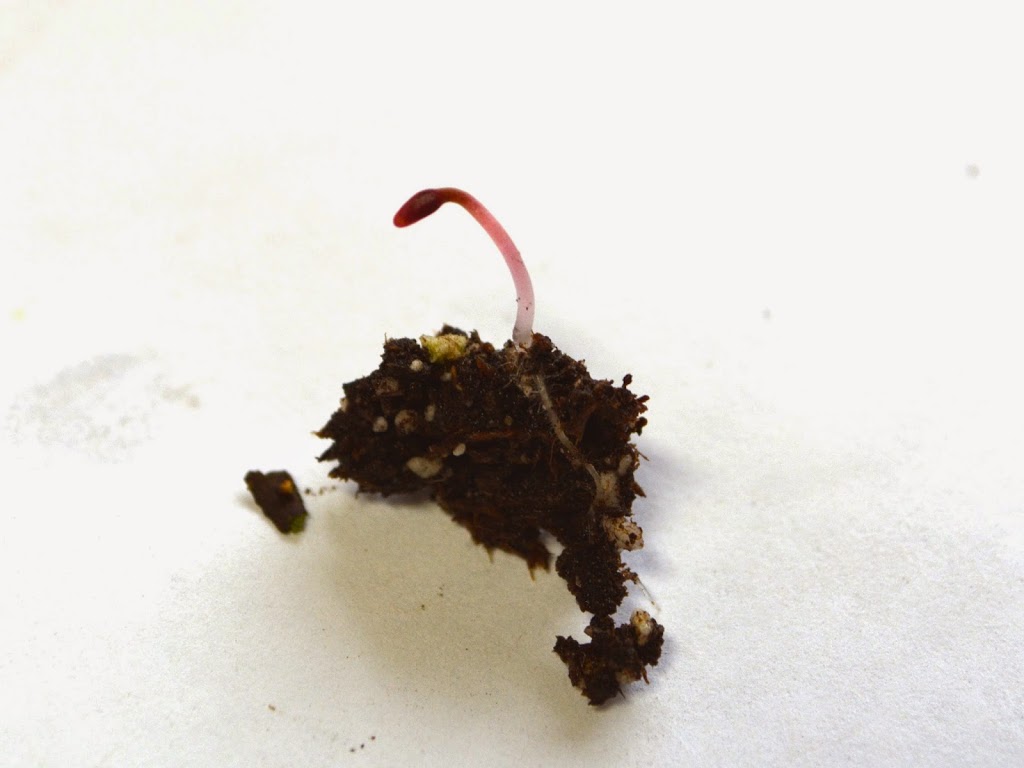 This makes two with red cotyledons and two with green (plus a volunteer, whose cotyledons I never saw).  It will be very interesting to see if seedling color is reflected in tuber color to any degree.
I’ve been keeping the ulluco seed flats very wet and heated to 70 degrees during the daytime and 55 at night.  I don’t know if that is the best approach, but it seems to work.  Because wet soil is better for germinating hard coated seeds than it is for keeping seedlings alive, I remove the seedlings to individual pots as soon as I spot them.