If it has been a long time since high school biology and you are rusty on the concept of cytoplasm, you can be forgiven.  It’s not something that most of us think about very often, but it is important to potato breeding, so let’s review. 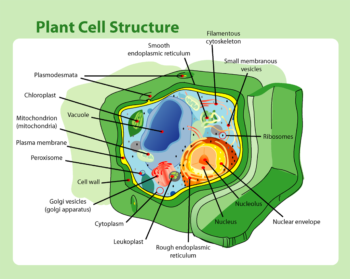 Cytoplasm is everything that is inside a cell but outside the nucleus.  The nucleus primarily contains DNA, in the form of chromosomes, that determines nearly all the traits of the organism.  The cytoplasm contains a diverse array of cellular machinery in a fluid medium.  Two pieces of that cellular machinery, the mitochondria and the chloroplasts, are very important in plant breeding.  Chloroplasts produce glucose through photosynthesis and mitochondria convert glucose into ATP, which the cell uses as an energy source.  Both chloroplasts and mitochondria contain their own genetic code and it is inherited separately from the DNA in the nucleus.  They have separate DNA from the nucleus most probably because they were once separate organisms.  Chloroplasts and mitochondria are generally accepted to once have been other unicellular life forms that became incorporated into the cell at the end of some long mutualistic relationship.  The details aren’t important, but if you think of the mitochondria and chloroplasts as two separate organisms, this will all make more sense.  The genetic code of the mitochondria and the chloroplasts is known collectively as the “cytoplasmic genome,” presumably because people got tired of typing “mitochondrial genome and chloroplast genome.”  We shorten that even moreso when talking about plant breeding to simply “cytoplasm.”

During sexual reproduction, the DNA in the nucleus gets mixed and matched.  Chromosomes from the male and female intermingle and combine, so the resulting progeny has a mix of genes from both parents.  The situation is completely different for mitochondria and chloroplasts.  When the potato flower forms an egg cell, it is derived from an existing cell and inherits its set of mitochondria and chloroplasts from the potato plant.  Later, when that egg merges with a sperm, it keeps only the sperm’s DNA.  It retains the cytoplasm that it originally received.  The important thing to understand here is that the cytoplasm always inherited from the mother.  They are genetically identical to the mother’s copies.  Nuclear DNA is a mix of mom and dad, but cytoplasmic DNA is always mom.

Why does this matter?  Because potato varieties each carry their own unique mitochondria and chloroplasts and these sometimes confer important traits.

Potato cytoplasm has been classified under a number of different types, defined primarily by the population of potatoes from which that cytoplasm originated.  As with many aspects of potato research, classification of cytoplasm types has evolved over time and several different systems have been used.  The most modern system (Hosaka 2012) incorporates both chloroplasts and mitochondria into a single classification system.  The types are M (Mother), A (Andigena), P (Phureja), W (Wild), D (Demissum), and T (Tuberosum).  Separate classification systems also exist for chloroplasts and mitochondria.  Chloroplasts are classified as C, A, S, W, and T.  Mitochondria are classified as α (alpha), β (beta), γ (gamma), and the much less common d (delta) and e (epsilon).  You need to be aware of both systems to read the literature and some parts, particularly the mitochondrial types, are still commonly used.  There are also some much rarer types that don’t fit into these groups.  One system of classification divides cytoplasm into 164 haplotypes, a level of resolution that is probably not useful to breeders.  The following chart includes types defined by both of the systems that are commonly used in research papers.  The bolded rows are the most modern system.

If you have gotten this far, you might be wondering how this information is useful.  One way it can help to direct your breeding is by avoiding male sterility in potato crosses.  Male sterility isn’t all bad; it allows you to produce a lot of cross pollinated seed without having to segregate varieties or emasculate the flowers.  On the other hand, it limits the kind of crosses that you can perform.  Varieties with full fertility can be used more flexibly.  By avoiding parents with T, D, and W cytoplasm, you greatly increase the chance that new varieties will be fully fertile.

Another use is perhaps less practical, more a matter of philosophy.  Many people are working with potatoes that have the common cytoplasm types.  If you are an amateur or specialty breeder, why not try something different?  The M, A, and P type cytoplasms of Andean potatoes are not well represented in modern potatoes.  There are a variety of reasons for this, but the main one is that they simply haven’t been used much.  Tom Wagner has often mentioned that he likes to work with the old Irish variety Lumpers because it is one of the last few European holdouts with A type cytoplasm (and it has a fairly rare haplotype of that cytoplasm).  I can’t point you to a single reason why the A type cytoplasm from Lumpers is a better choice than any other potato, but my instinct as a plant breeder is to preserve and expand diversity whenever possible.  The limited number of cytoplasm types present in modern varieties is often referred to as a genetic bottleneck.  Genetic bottlenecks create an environment where pests and diseases can suddenly get the upper hand.  For this reason, if no other, I think it is a particularly good idea for small breeders to range far afield.  By including more Andean varieties and wild species in your breeding projects, you can diversify the types of cytoplasm that are included in your population.